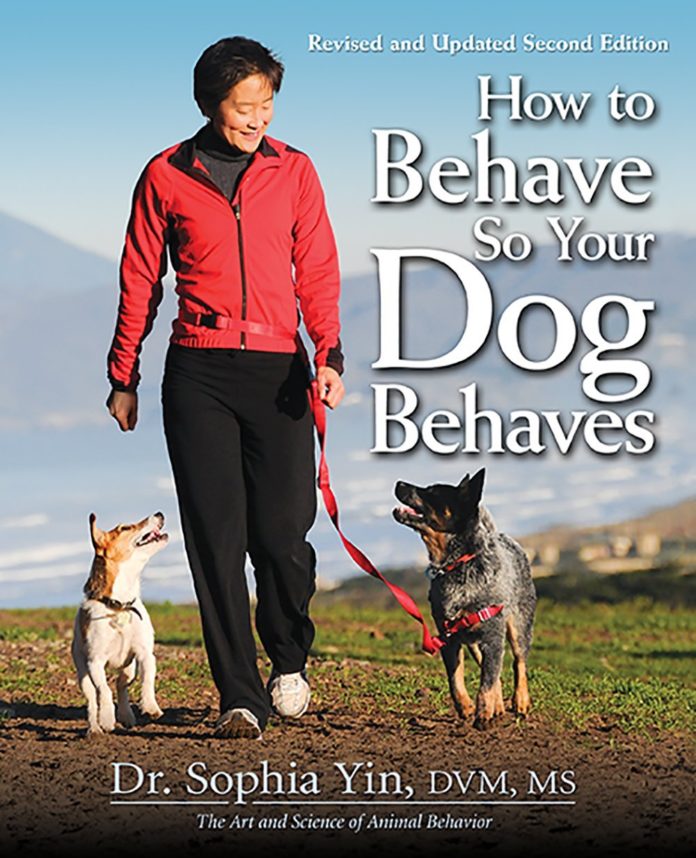 When most people see a behavior in their dogs that they dislike, “they automatically ask, ‘How can I stop that behavior?'” says late veterinarian and applied animal behaviorist Sophia Yin, DVM, MS. Instead, Dr. Yin deftly posits, it is more useful to ask, “How has the undesirable behavior been reinforced, and what behavior would I reinforce instead?” By which she means, every time we interact with our dogs, they’re learning something. Each interaction is, in effect, a training session. We’re just not always training the way we intend.

Think about dogs you’ve seen who won’t come when their owners call. The owners say “Come” several times, each time with more exasperation, until the dog finally does come and then gets yelled at some more — or worse. That only teaches a dog that coming back to their owner involves punishment. Who would willingly head for punishment? Of course the dog spends a lot of energy (his and yours) keeping his distance.

The bottom line here: yes, we have to modify our own behavior to get our dogs to do something, but we have to modify it in ways that will get them to do what we want rather than what we don’t want. In many cases, owners teach their dogs beautifully that “coming” is a really bad idea, one to avoid at all costs.

In her phenomenally clear and useful book, How to Behave So Your Dog Behaves, Dr. Yin shows dog owners the tricks of the behavioral trade so that our pets willingly accept our cues for acting appropriately and feel more bonded to us in the process.

Training dogs (and people, by the way) involves reinforcement and punishment. Both can be positive or negative. For instance, giving a dog a treat for coming is positive reinforcement — you’re adding something good into the equation — while shocking him with an electric collar until he starts coming is negative reinforcement.

The terms are a little more confusing when it comes to punishment, which generally happens when you want to train a dog not to do something. “Positive” in this case doesn’t mean it’s actually a positive measure. It just means you’re adding a punishment into the equation, like hitting a dog for acting in a way you don’t want. Negative punishment means subtracting something the dog wants — your attention, access to a favorite toy, and so on.

Far and away, Dr. Yin says, the combination that works best for training purposes is positive reinforcement combined with negative punishment. You want your dog to learn to come back to you when you call? Reinforce the good behavior by providing him with warm praise and a delicious treat each time he complies. (When he doesn’t comply, or doesn’t comply right away, bear in mind that training is two steps forward, one step backward, and keep your cool. Responding with negative reinforcement or positive punishment is only going to teach him that coming back to you is a bad idea.) And respond to undesirable behavior, in part, by removing something from the situation that your dog craves. Your dog jumps on you? Don’t act like a squeaky toy. Even a disgruntled squeaky toy can serve to delight him. Instead, turn away and ignore. Withholding attention will teach him that jumping takes away his greatest resource: you.

That’s the gist. But Dr. Yin doesn’t leave it at that. The bulk of her book gives hands-on guidance for teaching both basic good-dog behavior and implementing solutions for common canine problems. As a prelude, she makes the important point that dogs “can’t all learn the same tasks equally well, and even when trained in exactly the same manner, they may not learn exactly the same thing,” partly because of past experience and differences in motivation levels but also because of genetic traits and individual predispositions, just as people have. Still, with the right tools, just about any dog can be trained to be a dog who’s easy, or easier, to live with.

In two large sections, the book lays out five-minute guides to basic good dog behavior and five-minute guides to solving common canine problems. “Five minutes” doesn’t mean you can teach your dog better behavior in just a few minutes. It means that with little bursts of training here and there during the day, you can bring your dog’s deportment forward.

This section gives step-by-step instructions for teaching the cues to sit, leave it, “watch me,” walk nicely on leash, come, lie down, and “go to your place,” with a couple of others thrown in for good measure. “Walk nicely on leash” is a common one that a lot of loving dog owners have not gotten down pat with their dogs. Their canine pals strain and lurch to go faster than their human guardians want or otherwise take the dignity out of what should be a simple, enjoyable stroll for both.

Dr. Yin recommends that before your speed-walking dog unfurls the leash completely, stop dead in your tracks and make like a tree. “Eventually,” she says, “he’ll turn and sit in front of you,” which earns him an immediate treat. Keep doing that so he learns that he must walk with you instead of trying to make you go faster than is comfortable for you. At first, she says, he won’t get the hang of it, so “don’t feel bad if it takes 20 minutes to go all of a few blocks.” But with distinct starts and stops, he’ll learn where he’s supposed to be positioned in relation to you when the two of you go for constitutionals. If you haven’t made a dent at the end of 20 minutes, Dr. Yin helps troubleshoot. Perhaps your timing is off, meaning you’re stopping too late, or you keep changing the distance allowed between you and your pet. Or he may not feel hungry enough to be motivated by treats, in which case you should feed him an entire meal as treats while training him so that the treats are not extras.

The section on solving problems also patiently takes the reader through the paces. For instance, if your dog shows signs of aggression to strangers when you go for walks, you can take immediate action by teaching him to say “please” for everything he wants in the form of sitting on cue (which shows your leadership) and distracting him at those times you sense he might lose himself to threatening behavior. Distractions can consist of games, rapid repeat “sits” going backwards or to the sides, and, if he is well trained enough, calling him back to you when he is ready to pound his chest, so to speak. When done well, Dr. Yin says, the distractions shouldn’t even seem like distractions. Instead, they should seem like fun things to do that are more interesting than showing the next dog (or person) what an aggressive posture he can mount.

Other problems tackled in this section include inappropriate/excessive barking, food and toy possessiveness, separation anxiety, and nipping, to name a few.

Dr. Yin reminds readers that not all behavioral problems are behavioral in origin and that sometimes a medical problem can cause behavioral issues. She says, too, that dogs don’t traffic in spite. In other words, we shouldn’t get caught up in attributing our unfortunate human motives to them. Along those same lines, she reminds dog owners that some behavior is simply influenced by genetics. “It’s why,” she says, “dogs fight with their teeth, horses kick and bite, and sheep ram each other with their specially equipped helmet-like skulls.” Yes, environment influences behavioral tendencies, often to an astonishing degree, but not necessarily completely.

One of the very good things about this book is that at all times Dr. Yin talks with readers rather than at them. It’s clear she understands dog owners’ frustrations and keeps them in mind in her very clear instructions so that loving dog owners stay engaged and ready to act on their canine pals’ behalf. Another way of putting it: this book makes a terrific stocking stuffer for any of a dog’s human family members.