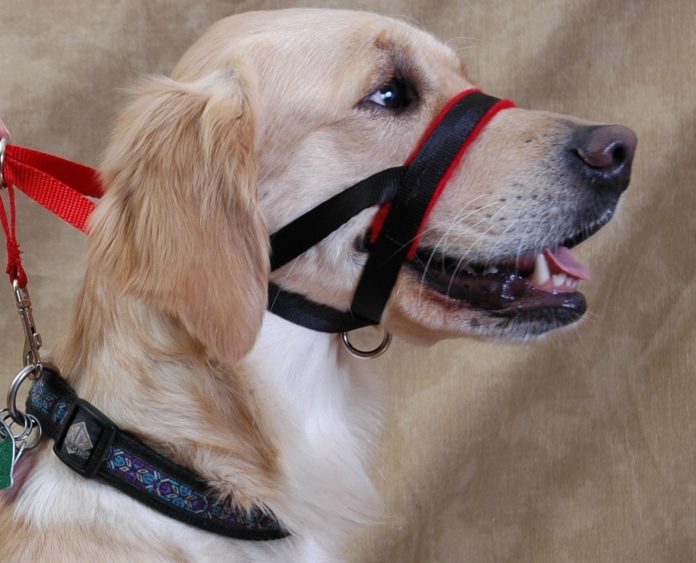 In a book by a popular and generally well regarded dog trainer, under the heading “Equipment to be avoided, and why,” it says that a head halter is the wrong choice for walking your pet because

“It is very uncomfortable to be pulled around by the head.”

“It…prevents the dog from looking around, choosing where to look and sniff, and giving signals to other dogs.”

“Most dogs…become depressed….others might become irritable at this thing around their face…and can become stressed.”

To which Tufts veterinary behaviorist Stephanie Borns-Weil, DVM, replies, “If you’re using a head halter to pull a dog around by the head, then you’re using it inappropriately.” It’s also “not true,” she says, that a head halter “prevents a dog from looking around and sniffing, etc. You’re not supposed to use a head halter to have a dog in a half-nelson headlock,” she says. “We’re talking about loose-leash walking. A dog in a head halter should be able to look around wherever it wants.

“I analogize it to a baseball bat,” Dr. Borns-Weil continues. “It can be downright dangerous if used incorrectly. It can be used as a weapon. But it doesn’t mean it shouldn’t be used to play baseball. This whole subject frustrates me,” she says, “because I see so many people who start using a head halter, and then are told by a trainer not familiar with its use that it is a terrible device. As a consequence they switch to something else before determining whether the head halter is really the right choice.”

Why the head halter can be misunderstood
Much of the problem with head halters is that using one correctly is not intuitive; it takes time to get the hang of it. In large part, that’s because “most people who work with dogs are trained to use corrections, so they put a firm yank on the leash when they want a dog to come along or not antagonize another dog, or a person,” Dr. Borns-Weil says. “But if you do that with a head halter, it undermines its potential for effectiveness. Tugging on it should be gentle, and not for a correction, or punishment. It should be a communication. ‘Can you please slow down? I can’t keep up with you.’ Or, ‘I have to move you quickly away from something dangerous, like oncoming traffic.’

“It’s like learning to drive a stick shift in England, where everything is upside down and backwards,” the doctor says. “Most people who train with regular flat collars and a leash are taught to put a sharp jerk on the collar to get the dog to heal. That’s not good in any instance, and is entirely inappropriate with a head halter.”

The right way and the wrong way to get your dog to go in the desired direction
No dog should be “pulled around” no matter what the device, Dr. Borns-Weil says. So many dogs, when you see them dragged or pulled along by a leash attached to a flat collar, are gagging. And making a dog gasp for air — cutting off her airway — “only increases panic and arousal in a dog who’s already aroused,” she notes. “For short-faced dogs like Pugs, cutting off the airway can even increase intracranial pressure and cause severe problems, like making the eyes bulge unnaturally. You’ll sometimes see a dog turn blue when the neck pressure from a tightening leash causes her not to get enough oxygen. She is being strangled.”

That is one reason a head halter, which goes around a dog’s snout, might work better than a collar around many a dog’s neck. For brachycephalic dogs, whose noses are too short to fit a head halter, a body harness can take the place of a collar that goes around the neck.

“It’s less uncomfortable and less dangerous to have pressure on the nose [or trunk of the body via a harness] than on the neck,” Dr. Borns-Weil explains. “There are delicate and important tissues in the neck. On autopsy, a significant number of dogs who had choke collars had damage to their soft tissue there.” (That’s part of the reason choke or prong collars should always be out of the question. The other part is that it is mean to hurt a dog, and that is just what those types of collars do.)

The pressure on the head and nape from a head halter should not be forceful, as some people make it with leashes attached to neck collars. In fact, it should be a very light touch. Those are very biologically sensitive areas on a dog that respond to gentle tension. More is counterproductive.

“If used correctly, pressure on a head halter is like navigating someone through a crowded room by putting a hand on the back of their shoulder,” Dr. Borns-Weil says. “You’re guiding rather than pushing, using very gentle pressure to communicate with them through touch. If you overuse it, that’s when you’re doing it wrong — pulling the dog around by the head.”

Not only do you have to use the head halter gently, you have to reward the dog’s cooperation with warm words of praise and a treat, at least at the start. “Tugging on a head halter doesn’t do anything by itself,” Dr. Borns-Weil says. “It has to be used in conjunction with praising appropriate behavior, which is critical to proper training. That’s what will seal the deal for teaching a dog not to pull too fast, or in the wrong direction.”

Which dogs might benefit from a head halter?
“If a dog pulls really hard and runs out to the end of his leash all the time and tugs to the point that it becomes difficult or dangerous to walk her, a head halter could be a good way to train her,” Dr. Borns-Weil says. “Some dogs are severe, inveterate pullers. They’ll pull your arm out. For someone like me, who kept having her shoulder dislocated before I had shoulder surgery, or perhaps for an old person, a head halter can be a great tool to get a dog to listen to you, to hear you when she’s otherwise distracted.

“You don’t have to have totalitarian rule where you control every aspect of a dog’s life, even when walking her. But you do have to be able to proceed in a safe and orderly way so no one gets hurt.

“A head halter is also a good device for dogs who act aggressively to other dogs, which is almost always a case of trying to keep themselves safe because of fear.”

Dr. Borns-Weil uses the example of her own dog, Koshi. “Koshi is an 80-pound Doberman,” she says. “If he yanked me suddenly, especially in the winter when everything is ice, I’d go down, even though I’m strong for my size.”

And Koshi, who did not come into Dr. Borns-Weil’s life until he was seven, has some anxiety that can make him overreact to other dogs, increasing the possibility that he will tug hard.

But, Dr. Borns-Weil says, she was able to use a head halter with him as a means to an end. “Now that we have communication down,” she says, “I’ve gone from a head halter to a body harness,” which doesn’t offer as much control but still allows significantly more gentle control than a leash attached to a collar around the neck. “I’ve counter-conditioned him from reacting to other dogs by reassuring him when we come near one and giving him a treat for remaining calm, even though at first it was my telling him to ‘leave it’ and putting gentle tension on the leash. With that technique, I taught him that it is safe to ignore the other dog, so aggression is not necessary. I was giving him the message that I was going to protect him, help him through a difficult passage, rather than ‘correct’ him for unwanted behavior.

“Now, when we pass a dog that gets Koshi agitated, he still tenses up a little but immediately looks for his treats. I tell him to ‘leave it,’ and he knows that by doing so, he will be rewarded.”

As wonderful as a head halter can prove, however, it is not for every dog — not even for every dog who could potentially benefit from one. “If the head halter fits your dog correctly, and you’re using it correctly and your pet still hates it, it may not be the appropriate apparatus for training her,” Dr. Borns-Weil says. She likens it to choosing the right sport. Her partner “doesn’t like skiing,” as an example. “She finds ski boots punishingly uncomfortable. Snowboard boots are comfortable. So for her, it’s a better sport.”

People have to keep that possibility in mind with their dogs, the doctor says. “If a dog just can’t forget she has it on and can’t enjoy herself when you go for walks, it’s not for that dog. In that case, I’d go to an Easy-Walk harness or a Freedom no-pull harness, or one of that ilk. There are a whole bunch of no-pull harnesses now. They tend to attach around the front. They do not communicate with a dog as sensitively as a head halter, but in many more cases than not, they will improve communication between the two of you much better than pulling on a lead connected to a neck collar.”

In fact, Dr. Borns-Weil says, for some dogs, “I think a head halter is probably over the top — you don’t need such sensitive attention. For many dogs, a no-pull harness will do the trick. I used one to teach one of my dogs who was a puller. It slowed her right down. A harness alone works well for many dogs.”

Getting the hang of a head halter
If you do want to try training your dog to heed your cues as you walk together with a head halter, note that using one does not come entirely naturally at first, as we suggested. It takes a little getting used to. For example, you even have to become acclimated to using it to auto-correct. Say your dog tries to pull you along instead of walking more or less at your side. (She doesn’t have to heel — that’s just for show dogs.) Simply stand still. She can’t pull when you make like a tree. The tension on the nose strap will automatically make her head turn to look up at you, and she will have to walk back to you or wait until you catch up so the tension is released with some slack and she can resume forward progress. Same thing if your dog is lagging behind. To release the tension now delivered to the nape of her neck, she will have to catch up to you. You don’t even need any gentle tugging. (But when she reaches you, you’ll want to let her know what a good girl she is and provide her with warm praise and a delectable treat.)

The Gentle Leader company has a good video showing how to use its own brand of head halter to get a dog to stop pulling. But in the main, videos showing how to properly use a head halter (especially to curb aggression) are lacking. For that reason, and because it could take a while to get the hang of it, it could be “helpful to pay to have a trainer show you how to use one,” says Dr. Borns-Weil. “This is especially true if you have been trained in leash correction,” which involves a sharp yank. “That’s the antithesis of using a head halter correctly,” she says, “the philosophical opposite. You’re not correcting with one. You’re guiding with a very soft touch.”