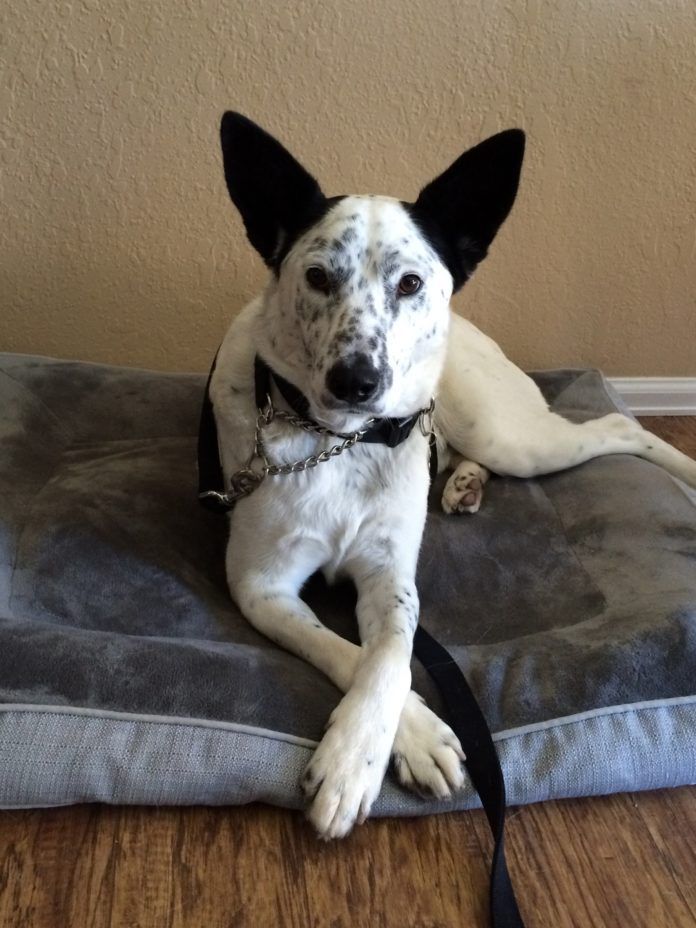 Deborah Betson of Aurora, Colorado, has a situation. Her mixed-breed dog, Camo, has begun to growl when she tries to move any of his toys or his dog bed. She can’t even move his possessions around in order to clean.

She adopted Camo only recently from a Colorado correction system program that takes dogs from various shelters and gives them to prisoners to train, and the first couple of months went beautifully. In fact, Camo is by all accounts sweet, lovely, and very well trained, and although he is extremely shy with other dogs and other people, he and Ms. Betson have bonded well. But his new behavior, exhibiting itself only a short time into their lives together, is causing quite a problem. Ms. Betson wants to know if there are any methods for helping Camo feel more secure as she moves things around. Ms. Betson, there are. But first, an explanation for Camo’s new behavior.

Resource guarding
Camo is engaging in what animal behaviorists call resource guarding. It is an aspect of owner-directed aggression, also known as conflict aggression. The conflict is the dog’s own inner conflict that stems from anxiety, from not understanding how things are supposed to work in his household. “In the past, we would have called Camo’s behavior ‘dominance’ behavior,” says Tufts Animal Behavior Clinic veterinarian Stephanie Borns-Weil, DVM. “But most dogs who act aggressively toward their owners do not feel dominant. They are not thinking, ‘I have a higher status than you.’ Most likely they don’t have that level of sophistication,” Dr. Borns-Weil says.

It stems from uncertainty that leads to nervousness. “Is this my stuff? Is it your stuff? I don’t know what you expect of me around the things I value. You keep picking them up, so I don’t know when they’re mine and when they’re not mine.” Most dogs are resilient enough to read us and figure out what we expect from them, and are also somewhat flexible. But “for an anxious, special needs dog like Camo, his environment does not have enough predictability and consistency,” Dr. Borns-Weil point out. “There’s uncertainty about the signaling.”

Why is the behavior popping up now, after Camo has been with Ms. Betson for a few months already? Dr. Borns-Weil suspects it has nothing to do with the way he was trained in the Colorado prison system, nor with the way Ms. Betson has been interacting with him.

Rather, dogs reach social maturity anywhere around the age of one or two, and Camo has apparently reached his right about now. That’s when insufficient socializing during a dog’s first few months of life tends to manifest itself in behavior. Before, a quiet, insecure dog like Camo might have shied away from trouble. But if he has any bit of temperamental boldness, it can start to show itself in behavior at this age. And it will start to show itself in unfortunate ways if the boldness is contaminated by anxiety born of unfortunate experiences when he was a young, impressionable puppy rescued from who-knows-where (long before he got into the prison program). In other words, “Ms. Betson has adopted a dog that has a lot of baggage,” Dr. Borns-Weil says. “That baggage has become apparent at this particular developmental stage.” It’s as if the maladaptation was on a timer.

“When I have a patient like this in the exam room,” says Dr. Borns-Weil, “I analogize to the owner, ‘it’s as if every time I look at you, you start feeling around in your purse for your wallet to make sure I haven’t taken it.’ Most people know I’m not going to take their possessions, but if something traumatic happened to someone in the distant past or if they were uncertain about the social rules, it could lead to undue anxiety about her resources.”

A three-pronged solution
The good news in all of this is that while Ms. Betson didn’t cause the problem, she can solve it — by taking three steps.

1. Plenty of exercise. Because Camo does not enjoy the company of other dogs, Ms. Betson is not able to take him to a local dog park. She is also constrained by the fact that, as her communication to us revealed, she has a very small backyard. Still, Camo must have sufficient physical activity — “maybe an hour or more a day,” Dr. Borns-Weil says. “This has to happen, or she’s not going to be able to fix the problem.” Dogs, like people, need exercise for their mental as well as their physical health. They are bred to burn energy. Maybe Ms. Betson can take Camo on two long walks every day using a head halter so that he does not lunge at other dogs but instead responds to her gentle tug on the lead. Some dogs even enjoy going on a treadmill. But one way or another, Camo has to move his body.

2. Avoidance of the guarded resources. Ms. Betson should make a list of every situation that causes a growl, snap, or snarl — touching Camo’s bed, his toys, perhaps walking by him while he’s eating. Then she should avoid letting those situations occur. For instance, feeding may need to be in a quiet place, with no bowls left around for Camo to guard. The bed may need to remain in an out-of-the-way place, too. If Camo wants to rest on it, he’ll take himself there, even if it’s not his preferred spot. Additionally, all toys over which Camo growls should be put away (when Camo is not in the room to see them removed). Ms. Betson may find, when she catalogs his instances of growling, that not every toy elicits a reaction. But if they do, it’s possible he won’t be able to have any toys for a while. This is not a punishment! It’s a way of not making a bad problem worse, of preventing further failure in communication between dog and person.

Consider that a growl always has the potential to turn into a bite. And when it comes to a dog’s reacting with a bite, the dog is always going to win. “He has bigger teeth,” Dr. Borns-Weil points out. “You don’t want to get into a confrontation with someone whose teeth are an inch long. While they use their teeth, we have to use our brains.” Think of it as you would a four-year-old with a pocket knife, she says. The youngster lacks judgment and is unable to read situations, so you don’t want to give him any reason to use the blade.

But there are other reasons to put away the anxiety-producing toys that go beyond not getting hurt. “It’s also therapeutic” for the dog, Dr. Borns-Weil comments. “Every time an owner does something that the dog doesn’t like, he becomes a little more sensitized and worried. For example, he may start out guarding his food bowl. Over time, if the owner keeps trying to take his food despite his growling, he may begin to show aggression when the owner just walks in the room. “Also, the doctor notes, “a dog can tell that we recoil when he growls or bares his teeth.” So he learns from that; he keep repeating the pattern over and over — ‘she reaches, I growl, she backs up.’ You have to shut down that cycle of learning so that he can begin to learn better strategies.

3. Clear communication and leadership. Being a leader “is hard for soft owners,” Dr. Borns-Weil says. They don’t want to make their dog do things, to act as if they’re lording it over their pet. But clear, predictable leadership makes things easier for an anxious dog, not harder. The dog craves knowledge of what to expect; it actually makes him feel as if he has the power to control his environment rather than be controlled by it.

Start with food. When it’s time for a meal and the dog comes over, Ms. Betson can give a simple command, like “Sit.” Then she should give him a few seconds (like three) to respond. If he does, she can put down the bowl with the food in it. If he doesn’t, she should put the food away. That puts the outcome in Camo’s hands. He has the opportunity to “control” the situation. It’s okay if the dog misses a meal by making the decision not to sit. He’ll be okay. Think of it as teaching a child to say “please” before telling you to pass the potatoes, Dr. Borns-Weil says. He learns what’s expected of him, and it makes him a more secure, more pleasant child to have around. “It helps everybody get back to a baseline of not circling their wagons.”

Down the line, Dr. Borns-Weil says, when the dog gets the lay of the land and understands the consistency and predictability of the rules of the household and is therefore calmer, his owner can try giving him back some of his valued toys. He will have to work for them — “Sit,” “Down,” and so on — but he will feel secure enough in her leadership not to freak out if she picks up one of his belongings or moves his bed to vacuum, and so on. It’s a way of rewarding the dog’s success rather than punishing failure and thereby strengthening the bond between pet and owner.

Some dogs need medication to help the process
“For many, many dogs, behavior modification is enough” to coax them out of their resource guarding and other owner-directed aggression, Dr. Borns-Weil says. But for certain dogs who have a lot of anxieties and fears, medication can be helpful by stabilizing mood and getting the pet over the initial hump so that he can pay better attention to the training. “Something such as an SSRI, a serotonin reuptake inhibitor like fluoxetine [Prozac], can decrease background reactivity,” the doctor says. It’s something to consider if the behavior changes themselves aren’t having enough of an effect on the dog — or aren’t having an effect fast enough. 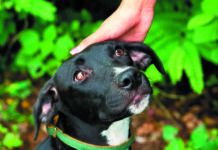 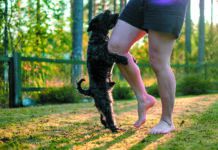