“In many of my conversations with clients, they are very apologetic about the fact that their dog sleeps on the bed with them,” says the head of the Tufts Animal Behavior Clinic, Stephanie Borns-Weil, DVM. They think it’s proof that they are too lenient and doesn’t show the dog who the leader is.

“I happily reply,” says Dr. Borns-Weil, “‘Yeah, I know what you mean. I can’t sleep without a dog, either.’” In other words, there’s absolutely nothing wrong with letting a dog sleep up on the bed with you.

There’s also nothing wrong with so many of the other behaviors dogs engage in that people assume means the dog is walking all over them. Common ones that people worry about unnecessarily include:

The idea that letting your dog do these things is not okay is rooted in false notions of dominance, the doctor says. But as we said in the October issue, dogs don’t have a need to be dominant and therefore don’t need to be trained away from that tendency. They desire easy access to a desired resource, but they are not lording it over you.

The bed is a desired resource because it means being closer to you; dogs are incredibly social beings. It’s the same with being allowed on the couch.

Many dogs also prefer to hang out on the couch rather than the floor because they descended from territorial predators and like to be able to survey their surroundings from the best vantage point. It’s the same reason a lot of dogs spend significant time on stairway landings — they can see all the comings and goings. What being higher up is not about is a sense that it makes her higher in the social hierarchy. She will not perceive herself as socially dominant if she is allowed to sit on the furniture. (Indeed, during the summer months, the desired resource may be the cool tiles of the kitchen floor rather than the couch.)

As for going in front of you during a walk, that’s simply because the dog is excited. And feeding a dog before you feed yourself is just a habit, not a statement. Some people simply may not want to make their pet wait while they themselves enjoy their food. That’s not giving a dog the upper hand.

When allowing certain behaviors is not a good idea

Of course, if you’re allergic to your dog you may not want her sleeping on the bed with you or hanging out on the couch. In those cases, it’s good to train your dog that those places are off limits. And whereas it’s fine to let your dog walk in front of you, it is still important for the leash to be loose so she’s not constantly dragging you and nearly knocking you off your feet. You certainly don’t have to put your health at risk to be a good guardian to your pet.

The reasons for not allowing your dog to do certain things don’t have to be medical. Perhaps your dog is large, and you don’t want her taking up too much room while you’re trying to sleep. Or maybe she sheds a lot and you don’t always want to contend with a couch full of hair — or with sheets you put over the cushions and then always have to add to the laundry. Training your dog not to climb “on board” is perfectly fine in those cases.

In other words, you don’t have to let your dog do things that interfere with your own comfort level. But it’s not necessary to keep her from doing them out of a mistaken notion that she is trying to take advantage of you. She’s not. She’s enjoying the love — like you do. 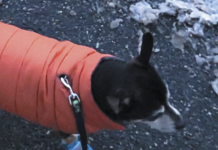 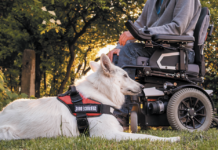 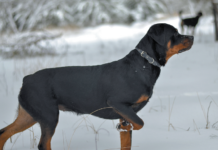