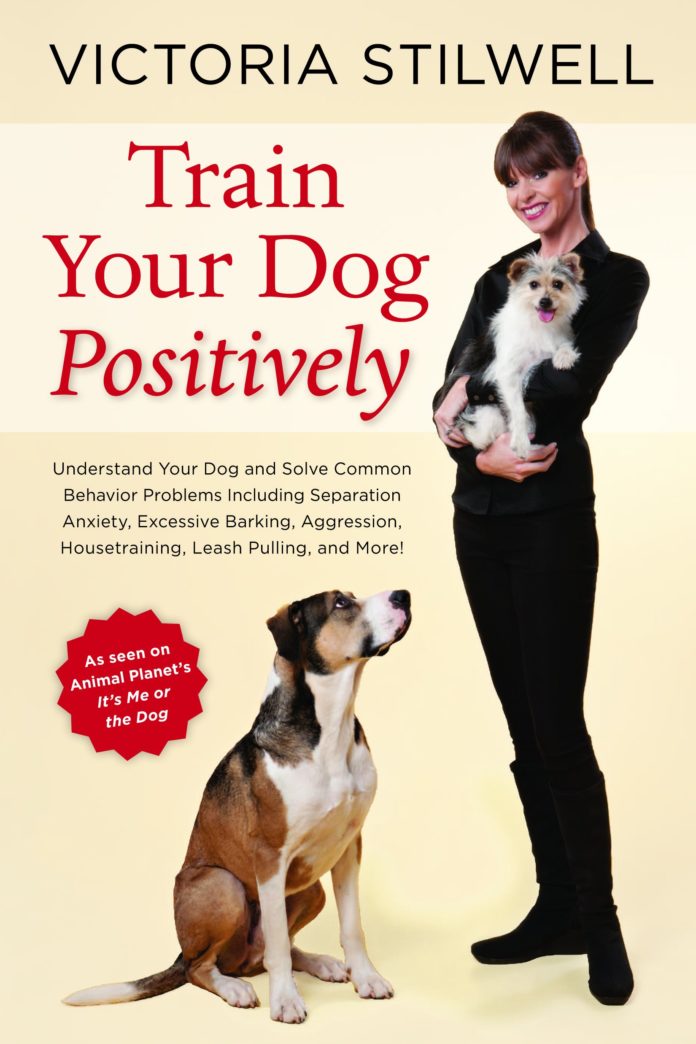 As a Your Dog reader, you’re already well aware that you should never punish your dog. The first reason is that it’s cruel, plain and simple, and will only fray the bond between you. Second, punishment won’t teach a dog the behaviors you do want him to engage in. In fact, it could serve to make him behave inappropriately whenever he gets the chance. As world-renowned trainer Victoria Stilwell puts it in Train Your Dog Positively, the aim is to reward a behavior you like to insure that it gets repeated, and to ignore or redirect a behavior you don’t like so its incidence will decrease.

What she does so beautifully in this book is keep reminding readers why positive, respectful training is the right way to go.

Ms. Stilwell points out that one of the reasons so many people get caught up in abusing their dogs through punishment, or at least disrespecting them, even unintentionally, is the widely ingrained, faulty notion that dogs misbehave to get the upper paw, to dominate us. The logical response to that is then to train them into “submission” so that they understand who’s boss. But misbehavior is not about dominance. Being “top dog” is our hang-up, not theirs. They are not interested in rank and hierarchy. They don’t harbor ambition or notions of “I’ll show him.” There’s no “ego” in the vernacular sense. Rather, dogs are simply opportunistic. They go after things that are meaningful to them — food, a favorite toy, what have you.

And if they become aggressive or pushy, it’s only because they feel frightened and want to protect their assets, or themselves (even if it doesn’t look that way). They may even be confused and anxious. Canine emotions and motives are generally not complex. When we project our own less-than-desirable feelings and qualities onto dogs, we incorrectly anthropomorphize them.

Where did this notion come from that dogs try to establish dominance? Largely, from a series of studies conducted in the 1970s on a pack of captive wolves who were not related to each other. These studies suggested that wolves had a fixed hierarchy in the pack, forcefully maintaining the group’s structure through displays of aggression. The very researchers who conducted the studies have since renounced their results, realizing that they had not been observing a true natural wolf pack. Just as much to the point, today’s dogs are about as genetically similar to wolves as we are to chimpanzees. You simply can’t draw easy parallels.

Consider, she says, that “dogs are one of the few types of animals who are willing and able to develop interspecies relationships,” sometimes even befriending our pet cats. Even a puppy can successfully form interspecies social attachments in just 90 minutes. (Wolves need 24 hours, and even then it only works if contact with the other species occurs before the wolf reaches four weeks of age.)

Dogs are so able to bond with people that they can read our facial expressions the same way we try to read theirs, enabling us to connect on an emotional level even without a shared language. Ms. Stilwell explains that “when humans look at a person’s face, their eyes tend to wander to the left, falling on the right-hand side of the face. This ‘left gaze bias’ happens only when we encounter faces, not objects, because the right side of the human face is better at expressing our emotional state.” She goes on to say that research has shown dogs also have this left gaze bias, but for them it happens only when looking at a human face. Apparently, dogs developed this skill to “read” humans through their close relationship with us.

Another way in which dogs accommodate us: they slow down to what for them is a glacial pace when we walk them on leash. They naturally walk much, much faster than we do — they have four legs, after all, not two. But every time we attach them to us with a leash, they “walk down the street taking tiny baby steps,” Ms. Stilwell says. Imagine wanting to go for a brisk jog during your very limited time outdoors and instead being stuck taking your 90-year-old grandparent for a short, boring walk around the block. In other words, dogs are not trying to get out in front of us to assert dominance when they pull us along. They’re simply excited and would rather move as fast as their bodies would take them if they were on their own. It’s a miracle they don’t try to pull us along every single step.

Sometimes the impatience toward and poor treatment of our dogs come from frustration. But we tend to expect things of them that we can’t follow through on ourselves:

“We have the freedom to choose who we want to greet and who to avoid,” Ms. Stilwell points out. But we expect our dogs to be adaptable and emotionally stable no matter who we decide may approach them and enter their personal space. It isn’t fair. We ourselves could not live up to the high expectation of being friendly every single time someone was pushed into our face without our permission. Why are dogs expected to be sociable with everyone they meet?

“New parents fully expect to be kept awake at night with an infant but for some reason when the new addition is a puppy, the little one’s nighttime needs are simply an irritant,” Ms. Stilwell says. Why? They are babies. They didn’t demand that you raise them — that was your decision.

Many people have difficulty controlling themselves around food. They eat when they shouldn’t just because the food is there. But they leave food on the kitchen counter and then expect their dogs to resist temptation. Instead of simply blocking access to places where food is left out, they unreasonably put the onus on the dog to exert “willpower.”

Along with making an excellent case that we often need to rethink our own behavior and attitudes in order to train our dogs as effectively as possible, Ms. Stilwell gives us words to use in reconsidering our approach: cooperation, not obedience; cues, not commands.

It’s not just academic; it’s also pragmatic. She devotes much of the book to helping people train their dogs out of such common problems as separation anxiety, aggression, thunderstorm phobia, excessive barking, and so on. It’s not that dogs don’t need discipline, she says. They do. But it comes through giving and subtracting rewards when necessary — not via punishment.

In one chapter, “Building the Bond,” she describes a situation in which a Pomeranian named Teddy was so attached to the wife in the household that he would bite the husband when he tried to climb into bed at night — to the point that the husband started to sleep in the guest room, saying Teddy was the next best excuse after a headache — “Not tonight, dear — I have a dog.”

Ms. Stilwell solved the problem by instructing the couple that only the husband was to give Teddy his favorite treats and toys. Over time, the husband’s coming home from work was something Teddy began to look forward to. The wife had a role in Teddy’s improved behavior, too. If the dog so much as growled when the husband came into bed, he was placed on the floor and ignored. He got the hang of it soon enough: the husband provided great resources, and unless Teddy treated him well in bed, his favorite resource — the wife — became off limits. No punishment. Just the withholding of something (someone!) desired.

In another chapter, she ingeniously describes how you can control a dog’s excessive barking by getting him to bark for treats. You also have to teach him to be quiet for treats, then start leaving off giving him treats when you give him the cue to bark. Soon enough, not barking becomes preferable to the dog because that’s the only response that elicits the treat.

In still another chapter, Ms. Stilwell explains that one way you can help get a dog past separation anxiety is by putting on your coat over and over, at first leaving for just a few seconds and gradually building up the time outside. Soon enough, the trigger that got him going fails to grab his attention.

Add in useful tidbits, like the kind of music dogs like (slow, simple classical music played on a solo piano at low frequency); the kind of TV they don’t like (programming with loud sounds and even louder commercials, meaning the dog never receives an auditory break); why tethering a dog increases aggression; and the fact that what sometimes passes for separation anxiety is just boredom (and how to tell the difference), and Train Your Dog Positively becomes a useful reference to have on your shelf.