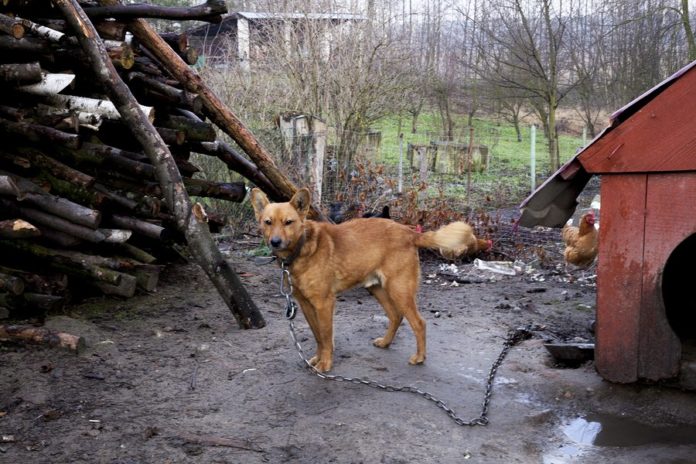 Neighbors had been seeing signs of abuse for a while. Just a couple of nights before the arrest, in fact, one man had witnessed the Everett, Massachusetts, resident hitting his 10-month-old pit bull with a stick. Others had seen him kicking the puppy and stomping on him. Some had tried to step in at times, asking if the dog was okay, only to be shooed away.

The tipping point was one night last October. At around 3 am, when a woman saw the man dragging his dog through the backyard, she called 911. The puppy was bleeding through the mouth and crying out in pain. By the time the police got there, the puppy could no longer stand, had sustained multiple fractures, and had evidence of strangulation around his neck. According to the report, the young dog had been thrown against the house multiple times.

The owner was arrested, charged with beating his dog nearly to death, and sentenced to two months in jail — arguably not enough time for what he did, but at least he was not allowed to have his dog back.

This particular story has a happy ending. A good Samaritan started a crowdsourcing campaign to raise $8,000 for the dog’s medical care, and more than $11,000 in contributions came in. The dog, originally named Chase, was adopted into a loving home and renamed Chance, because he got a second one.

Why didn’t anyone call the police sooner, you might ask? Why did the dog have to suffer for so long?

Often, people will see a dog being abused, or suspect a dog is being abused, and feel awful about it, but not step in. It’s not because they don’t care. It’s because they feel caught between a rock and a hard place. They want to help but fear retribution from the abuser, who for obvious reasons does not come across as a reasonable person who can be turned around with common sense.

But you don’t have to intervene in a way that puts you in direct confrontation with the abuser. In fact, you shouldn’t. That can only end up hurting you as well as the dog, who might very well be seen as the cause of the unwanted attention. The appropriate thing to do is call the authorities. If you don’t know how to contact the local animal control officer, call the police, or, if there’s an immediate crisis like the example above, dial 911. And don’t feel funny doing it. Every state has laws against animal cruelty. Once you make a report of alleged cruelty to an animal, the responding agency is required to investigate, points out the Humane Society of the United States. You will not be pooh poohed.

“Animal abuse is a felony and should be treated like any other crime,” says Emily McCobb, DVM, the Director of of the Shelter Medicine Program at the Tufts Cummings School of Veterinary Medicine. Moreover, those trained to deal with it are in a position to actually be able to do something for the dog.

Not infrequently, what you bring to the authorities’ attention about animal abuse will lead them to uncover other issues of abuse in the home, ranging from household dysfunction to domestic violence, child abuse, or neglect. Abuse tends to come in clusters, crossing species lines. (See sidebar.)

Determining whether you are witnessing abuse of a dog can be tricky. Most abuse is not direct violence perpetrated on an animal, as was the case with Chance. It’s somewhat more passive in nature. In fact, says the Humane Society, the vast majority of dog abuse cases that officials are called upon to respond to are about neglect. Neglect comes in a number of forms, including these.

1. Hoarding, a situation in which more animals than can be properly cared for are kept under the same roof.

2. Lack of veterinary care, say, in the form of untreated wounds, emaciation, or scabs and hair loss that can be signs of disease. (Not having enough money to take care of a dog does not excuse abuse — people who can’t afford to treat a dog properly should surrender their pet rather than subject it to poor treatment.)

3. Inadequate shelter. (A number of dogs died this past winter during the extreme cold snap that gripped much of the nation around New Year’s.)

4. Continuous tethering. Dogs who essentially live tied to a rope or chain are abused.

5.Being left in a car. If it’s frigid or hot out and the owner leaves a dog alone in a car for more than a few minutes, that’s abuse.

Of course, in a number of these situations, the abuser won’t be a threatening sort and you can, if you want, step in. For instance, you can offer to take a freezing or overheated dog into your own home for a while or offer to walk a tethered dog or, if resources permit, even offer to help the dog get some needed medical care. In some cases, you might suggest that the dog would be better off re-homed. But if your offers are refused or if you are not in a position to help in any way, you have as much of a right, some would say an obligation, to call the authorities when you witness these forms of abuse as when you see someone hitting a dog. Remember, while there are laws against abuse, they are only as good as their enforcement. If you don’t speak up for a dog, the criminal behavior has every opportunity to go unchecked.

The Animal Rescue League of Boston puts forth some signs of animal abuse in addition to those listed by the Humane Society. These include matted, singed, or always-dirty hair; a dog spending almost all of its time alone; a leash, collar, or halter kept so tight that it is clearly digging into the animal’s neck or face; or an unusual number of dogs coming and going from a given property. You do not have to feel funny about pointing out these signs to local authorities.

Sometimes, the more subtle forms of abuse can be related to mental illness, perhaps creating an inability to function properly or to perceive that a dog has feelings and needs consistent care. Substance abuse can inadvertently lead to abuse as well. Or a dog owner may be elderly and love his dog very much but not physically up to the task of caring for his pet properly. Again, not all dog abuse is sinister in nature. But it still needs to be addressed. You might be the eyes and ears a mistreated dog requires to get out of a situation in which it is, literally, trapped.