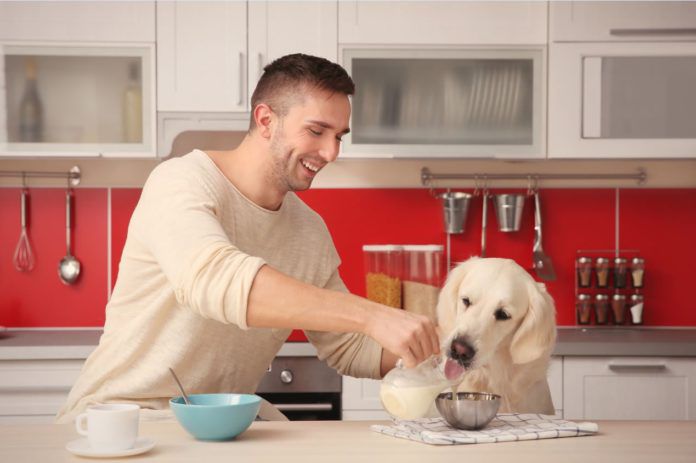 “Does your pet’s food contain dead pets?” That’s how one sub-title read for an article on slate.com, which went on to say in the first paragraph that dead dogs “might very well be what you are scanning at the grocery store checkout and scooping into your dog’s bowl.” The article also says that “the stuff that ends up in dog food is material that can’t be sold as food for humans,” making the point that what “can’t even go into hotdogs gets consolidated and shipped to rendering plants,” where it is “pulverized into one big blend of dead stuff,” heated for hours, and then put into pet food as meat and bone meal.

Ingredients that get rendered come not just from dead dogs, the piece says, but from other animals as well, so that pet food manufacturers don’t know whether their “main ingredient is chicken beaks or Dachshund.”

No wonder some consumers feel anywhere from anxious to up in arms about commercial dog food. Some go the extra length of making meals for dogs in their own kitchens to avoid the nasty ingredients but, in so doing, run the very real, and all too common, risk of malnourishing their pet because of lack of knowledge of the nutrition science that goes into making complete and balanced meals for canines. Their dismay is fueled not by one or two articles but by a kind of movement that warns consumers of what it sees as the sinister machinations of pet food companies. PetMD, in one article, spoke not just of “blood, feathers, and dead animals in meat and bone meal made from renderings but also canine and feline bodies.”

The scariest part of the warnings: dogs and cats in pet food is not illegal per se. Whether it ever actually happens is another story altogether.

What’s legal versus what happens

Yes, says board-certified veterinary nutritionist Cailin Heinze, VMD, DACVN, rendering plants do take those parts of animals that are considered unfit (or simply unpalatable) for human consumption and grind them up and then heat them. And yes, pet food manufacturers do use some of those renderings in the food they make for dogs and call it “meat or bone meal” or “meat by-product meal” rather than specifically identify the source of the “meal.” And they’re allowed to.

Some foods manufactured for humans have a certain level of non-specificity in their ingredients lists, too, which is why you might see, for instance, a muffin mix whose label says it contains “one or more of the following: lard, canola oil, cottonseed oil.” Why do companies do that? It’s because lard and canola and cottonseed oil are all different kinds of fat but for all intents and purposes have the same nutrition profile. If the manufacturer can at certain times get one fat more inexpensively or easily than another, they’ll do that, and it won’t change much about the nutrient value (or the taste) of the food.

It’s the same for dog food. Meat or bone or by-product “meal” might come from any one of a number of sources depending on market shifts in price or availability, but they can’t change the nutrition profile, called the guaranteed analysis, of the product, or the manufacturer would have to relabel the food.

But what are those sources? Can they be dead dogs, turning our pets into cannibals? Other unappealing ingredients?

Well, unappealing to us, maybe, but not beyond the pale.

“Here’s the gist,” says Dr. Heinze. “There are two types of rendering plants. One type receives its products from the same USDA-inspected [U.S. Department of Agriculture-inspected] slaughterhouses that serve people, those that prep and package meat and poultry from cows, pigs, and chickens.”

This is the type of plant from which most pet food manufacturers, certainly those large, reputable companies that have been in business many years, receive the “meal” ingredients. How does it work? Consider that at a USDA-inspected facility, only some of an animal like a chicken is going to end up as food for people — essentially the breasts, thighs, and wings. But that leaves a lot of chicken parts that we consider unfit or undesirable for human consumption: bones, small bits of meat, connective tissue, and various organs and the like. The bones become “bone meal.” The organs become “by-product meal” while other tissue might be called, say, “poultry meal.” And the pet food manufacturers can manipulate which parts they put into the food to make sure they’re getting nutritional equivalencies.

It makes perfect sense both for dogs’ health and for not wasting parts of animals that never get used to make human food. For instance, says Dr. Heinze, “pig liver has a texture that humans don’t like. So it goes into pet food.” Dogs are fine with it, and it contributes important nutritional value.

As far as dead dogs and cats, no, they’re not going to find their way into pet food manufactured by large reputable companies. They do sometimes get rendered, to be sure. But they don’t end up in batches of ground-up ingredients used for dog kibble, Dr. Heinze says. Why not? They are rendered at plants separately from discarded parts of food animals in USDA-inspected plants, which are processed much more uniformly.

“These are the renderings where they take a farm animal that dies,” Dr. Heinze says. “Your horse dies, you call a company, and they haul it off. They might also take animals from humane societies who needed to be put down because no one would adopt them, from veterinarians’ offices when they couldn’t be cured of an illness, from wherever. That kind of rendering plant is your classic ‘glue factory’ idea. They take everything together, grind it, put it in the vat, cook it down, and it becomes products like the bone meal for your garden. A lot of it also goes into cosmetics and other industrial formulas.

“But a huge company that makes 10,000 pounds of dog food at a time is not going to go that route. They need more volume, more animal parts, and those odds-and-ends batches also won’t meet their quality control. They need consistency to be able to reach a specific nutritional standard. Every truckload of rendered ingredients gets tested by a large pet food manufacturer before it gets used to make food. Yet because using rendered ingredients that did not originate in a USDA-inspected plant is not specifically prohibited by law, people get anxious.”

You don’t have to take Dr. Heinze’s word for it that you are not inadvertently turning your dog into a cannibal. A number of years ago, in response to fears about dogs and cats in pet food, the Food and Drug Administration conducted a well-controlled study that tested samples of dog food for the presence of remains that came from dogs or cats. The study was extremely sensitive, with the ability to detect 5 pounds of rendered remains in 50 tons — 100,000 pounds — of finished feed. The upshot: not a drop of DNA from dogs or cats was uncovered.

Forces that fuel the suspicion

Since consumers can’t tell from the label on a bag of dog food where the bone meal or by-product meal came from, distrust gets compounded. But, says Dr. Heinze, “the companies are not going to tell the general public, this is the slaughterhouse where we get our meat for pet food (although sometimes they’ll tell you the state.) So in a way, the lack of complete transparency about the origins of rendered food ingredients that get turned into meal helps fuel some of the rumors” about their unsuitability. “Because of the unknown,” she says, “the assumption is that the worst is true,” and then it becomes easy for the media to capitalize on the fear.

But there’s “so much fake news,” Dr. Heinze says. “I’ve even read one article on the Internet that said not only dogs and cats have been found in pet food but also their collars. That is so beyond ridiculousness that it’s hard to even imagine. Even if some company did want to put those things in its dog food [a highly risky proposition from the point of view of being caught and losing so much money on the backlash that a firm might even have to go out of business], “they are getting the material into the pet food plant already as a powder, a meal. No way it has things like collars in it!” Dr. Heinze says. “It’s so sensational, so ridiculous, yet it gets dumped right on the Internet. That keeps the rumors alive, despite the fact that there’s no basis in fact, no evidence to support them.”