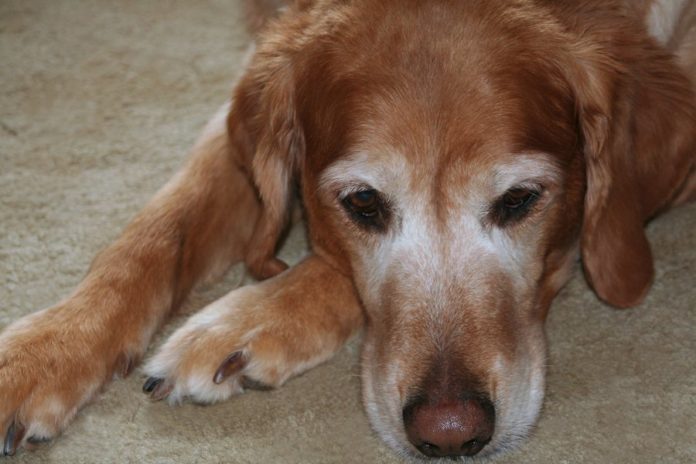 Sometimes it’s hard to know whether your dog is sick enough for you to make an appointment to see the vet. Herewith, the six signs that should at least prompt a phone call to the veterinarian’s office — and the six signs that you should skip the phone call and instead “scoop and run,” getting your dog to the emergency room as quickly as possible.

Behavior change. Your dog is just not himself. He’s either unusually agitated or unusually lethargic. For instance, if you excitedly tell him, “Let’s go outside,” he doesn’t even lift his head. Call the vet’s office. Depending on how long your dog’s behavior has been uncharacteristic, they may tell you to wait another 24 to 36 hours or bring him in right away.

Marked behavior changes are very nonspecific signs, so don’t panic. It could simply be a mild infection of, say, the GI tract. But it could also signal a life-threatening problem like acute kidney failure. That’s why you absolutely don’t want to wait more than a day or two to see if your dog’s behavior turns around on its own — and get your pet in right away if that’s what the vet’s office advices.

Vomiting or Diarrhea. If it’s a puppy, a little vomiting or diarrhea comes with a reasonable chance that you can take a wait-and-see approach. Pups often get into the trash or nibble on something they shouldn’t. The upset tummy will pass, and the young dog will eat and drink again when he’s ready. (Don’t put him on baby food or start giving him milk in the meantime. Baby food is pretty rich stuff for a puppy who’s sick to his stomach, and milk will likely disturb an upset stomach even more.)

On the other hand, if the signs of gastrointestinal upset keep up and the dog is acting sick, no matter what his age, you should get him to the vet’s office. In a young dog, it could very well mean he swallowed a sock or ball that has lodged in his GI tract — a surgical emergency. In an adult dog, unremitting episodes of vomiting or diarrhea could mean anything from an acute infection to cancer to a kidney problem. Even if the issue is easily solvable, the dog might lose so much fluid in vomit or watery diarrhea that he needs fluid infusions in order not to suffer the effects of dehydration.

Limping. If a puppy starts limping and acting like he will never take another step, you most definitely should not automatically respond by rushing to the emergency room. Chances are that he has not broken his leg but simply hurt himself a little. Puppies have not yet distinguished major from minor pain, so he’s apt to scream bloody murder — but more often than not, be running around again inside a half hour. Puppies do break legs and get bad sprains, of course. That’s why, if your pup is suddenly hobbling around in pain and won’t put any weight on his paw, give it a half hour. If after that time the pain persists, bring him in. Even with that advice, however, we should mention that only about one in five puppies we see with leg pain has sustained a fracture.

It’s different with adult dogs. If an adult dog bangs his leg he will simply say “Ow” to himself and get on with it. But if he’s limping and not able to bear any weight on a limb, even for a short time, he needs to be seen by the doctor.

Coughing. A single cough or even a bout of coughing is certainly nothing to worry about. But any persistent coughing that lasts at least a day should engender a visit to the vet. In a puppy, it could be a sign of pneumonia. As many as one in 20 puppies (a not insignificant 5 percent) ends up with pneumonia or some other respiratory issue — often within a month or two of his owner’s bringing him home. If it’s an adult dog, coughing can be a sign of heart disease.

Not Eating/Not Hungry. Anorexia in a dog, just like a marked behavior change, is a nonspecific sign of illness. If your dog’s eating pattern is off for a day or so, don’t hit the panic button. Sometimes it’s just a sign of a quick-passing intestinal “bug.” But if two days have gone by and your dog still won’t eat, especially even if you try to entice him with a favorite treat, get him to the doctor. It might just be an infection that needs antibiotic treatment, but in worst-case scenarios, it could be as serious as organ failure.

Drinking Lots of Water. This is not about lapping at the water bowl after some active playing outside on a hot summer’s day. It’s about drinking much more water than typically for no discernible reason. You’ll notice the difference. You’ll have to add to the water bowl much more frequently than you have been. If nothing else has changed (you haven’t switched the dog from canned food to dry, which contains much less water and therefore necessitates more water drinking), call the vet’s office. You’ll most likely be told to come in. Excessive water drinking can indicate diabetes, Cushing’s syndrome, or a problem with the liver or kidneys.

Blunt trauma. If your dog has been hit by a car or other heavy object, get him to the emergency room — even if he looks okay — and keep a close watch on him even if he is released. He could have life-threatening internal injuries that might be missed despite an entirely thorough workup. A case in point: one of our clinicians once examined a dog who had been run over by a car and, to his own surprise, detected no apparent injuries. The dog seemed absolutely fine — he wasn’t limping, behaving abnormally, or breathing abnormally, and he had good heart sounds, normal x-rays of his back and abdomen, and completely normal blood work. Reasonably enough, he was sent home. The next morning his owners found him dead.

It turns out his stomach and intestines, which had been in place at the time of the examination the day before, passed through a tiny hole in his diaphragm caused by the accident and impaired his breathing. The condition, called a diaphragmatic hernia, is missed on rare occasions even with a chest x-ray.

The moral here: Following any serious trauma, watch your dog like a hawk for at least 24 hours after appropriate emergency room treatment.

Difficulty breathing. Clearly, if your dog is struggling for breath, he has to be seen immediately, just as you would have to be.

Seizure. A seizure can result from a condition like epilepsy or a metabolic disease such as liver or kidney failure. Consider that both the liver and kidneys filter toxins from the body. When those organs are unable to do their job, poisons build up, including in the brain, where seizures occur. Yet another reason for the trembling, shaking, or twitching commonly seen during a seizure is hydrocephalus, a congenital condition in which fluids in the brain don’t drain properly. The problem affects Chihuahuas and English bulldogs more commonly than other breeds; it’ll come on when the dog is still a puppy. Finally, seizures may be caused by dogs getting into things they shouldn’t. Telltale toxins include lawn and garden chemicals, antifreeze, and lead paint (from chewing woodwork). If you see your dog seizing or sense that he is, rush him to the emergency room. The sooner whatever is causing the seizure is brought under control, the less chance for brain damage.

Distended, tense abdomen. If you observe this sign, think right away about gastric dilatation and volvulus (bloat and twist), which is a life-threatening emergency. Your dog may also appear anxious, uncomfortable, and unable to settle down, and perhaps may vomit some white foam as well. Don’t lose a moment considering whether to take him in. Minutes count. With this condition, the stomach fills with air and flips over, literally twisting upon itself and compromising its own blood supply. In an emergency operation, a veterinary surgeon will flip the stomach back over and secure it to the inner wall of the abdominal cavity. Dogs with bloat are rushed to our hospital more than once a week, on average. If they get there too late, they die.

Profuse bleeding. If your dog bleeds from a small wound and you can stop it quickly with mild pressure, you can deal with it at home. But if mild pressure doesn’t stop the hemorrhaging — or even if you have managed to stop the bleeding but the wound is gaping — get your dog right to the vet’s office. Do not apply a tourniquet, which can cut off circulation. However, during the car ride, keep applying pressure with gauze that you keep in place with tape or an Ace bandage.

Choking. If a dog can’t breathe, he can’t live. The most common things dogs choke on aren’t foods. They’re balls — ones small enough for them to pick up with their mouths but large enough to become lodged in the back of their throats. One of our doctors treated a dog who had inhaled a ball-like acorn. The dog loved to toss acorns into the air and then catch them, but he mistimed it once. The acorn lodged in his airway, causing him to gasp for breath and then faint. At that point, the acorn rolled forward and the obstruction was relieved. The dog regained consciousness and stood. Then the acorn rolled back down his airway again, and he obstructed and fainted again. But once the acorn was retrieved using a scope, the dog was fine.