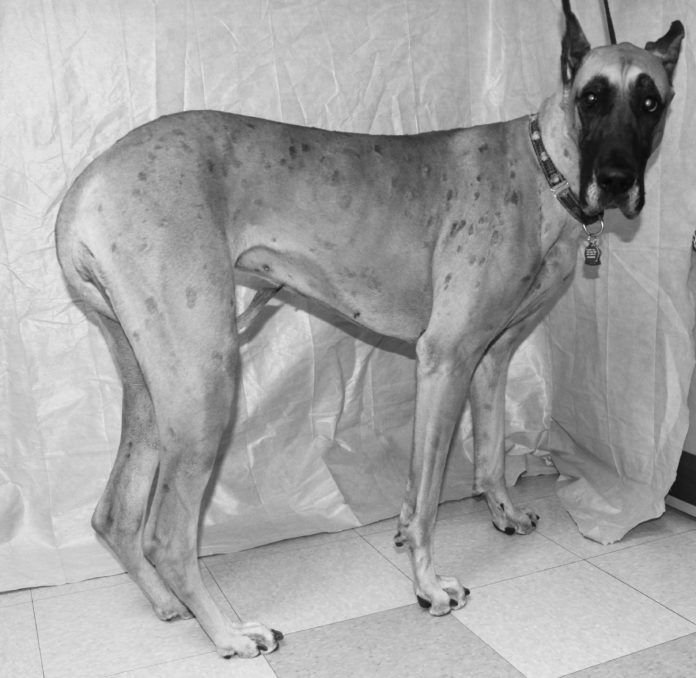 Whitney, a beautiful Great Dane, was absolutely fine until she turned about a year and a half. That’s when she started developing bumps on her skin. When the problem worsened, she would get secondary skin infections — “sort of lesions on her skin,” says Kim McCollough, Whitney’s owner. “There was some itching and hair loss,” Ms. McCollough adds, “but she looked worse than she was in terms of discomfort.”

Whitney was one of the lucky ones. The scratching, biting, licking, and rubbing to relieve the itching can be so incessant and vigorous that it causes not only self-induced hair loss but also wearing away of the skin, bumps that are quite nasty, scaly red spots, crusty areas forming over scabs, and thickening and hardening of the skin. On top of that, a dog will often develop bacterial or fungal skin infections, ear inflammation and infections (otitis), conjunctivitis, and hot spots of pus on affected skin areas.

The cause is atopic dermatitis, and it affects 10 percent of dogs, usually starting between the ages of one and three and lasting the entire length of the dog’s life. Any dog can develop the condition, but breeds in which it is seen relatively frequently include boxers, shar-peis, Dalmatians, English bulldogs, Irish setters, Labrador retrievers, German shepherds and a number of terriers: Boston terriers, Cairn terriers, Scottish terriers, West Highland white terriers, and Yorkshire terriers.

The discomfort a dog generally experiences from atopic dermatitis cannot be overestimated. Areas on the body that tend to be affected include the face, ears, abdomen, groin, paws, and those spots under the limbs where joints connect the legs to the body.

Unfortunately, there’s no cure, despite more than 550 research papers on the disease published worldwide to date. But while the illness is not fully understood and can prove difficult to manage, most dogs, once the proper treatment is applied, find full relief, and their skin returns to normal. A number of treatments exist, and different ones work better for different dogs.

While the way atopic dermatitis takes hold on a dog’s body remains somewhat fuzzy, the disease is essentially considered to be an allergy to environmental allergens: pollen, dust, mites, mold, and other airborne offenders. The allergies are believed to occur in combination with abnormalities in the structure and function of the epidermis — the outer layer of skin — caused by a genetic defect. The faulty layer of skin allows for increased penetration of allergens, while the allergies cause immune responses that lead to inflammatory reactions in the skin. That further aggravates the defect in the skin barrier, allowing greater assault on the dog’s body by offending substances. What also goes on in the vulnerable skin layer is that harmful bacteria colonize there, again making the skin that much less effective as a protector from foreign bodies and more prone to severe allergic reactions. It all becomes a self-perpetuating cycle of inflammation, itching, and then the attendant scratching and licking, which only aggravate the problem.

If that isn’t enough, the allergic reactions that play themselves out on the skin are often accompanied by ear infections, conjunctivitis, inflammation of hair follicles that leads to rashes and pustules, hot spots that emit pus, and an overgrowth on the skin of harmful fungi.

Making a definitive diagnosis of atopic dermatitis requires a history of the problem, a full clinical examination, and, perhaps most important, ruling out other itching diseases that can look like atopic dermatitis but aren’t. These include sarcoptic mange (scabies), which is caused by a parasitic mite; fleas and flea allergy; inflammation of hair follicles because of bacterial infection; Malassezia dermatitis, a skin condition whose root cause is fungi; and food intolerances or allergies. It can be tricky because atopic dermatitis makes it easier for a number of these other conditions to develop. That is, it needs to be determined whether it’s the root cause.

One way veterinary dermatologists determine whether atopic dermatitis is causing the symptoms is by conducting allergy tests: seeing whether specific airborne allergens cause reactions in a dog with compromised skin, or looking for reactions in samples of a dog’s blood serum placed in test tubes. But they also look at the whole picture, getting a history from the dog owner in the process. That often proves extremely helpful for figuring out what’s wrong.

There are two types of treatment: supportive treatment for every dog with atopic dermatitis and specific treatments, each of which will be appropriate for some, but not all, dogs.

1. Effective and permanent flea control because most afflicted dogs, in addition to having allergies to airborne substances, are also allergic to flea saliva, which can trigger a flare-up of the disease.

2. Effective control of secondary infections, including ear infections, eye infections such as conjunctivitis, and skin infections resulting from colonization of bacteria or fungi.

3. Bathing the affected dog one to two times a week with a soft moisturizing shampoo (those with oatmeal are quite good in that regard) or, for more severe cases, a shampoo prescribed by a veterinarian that has essential fatty acids and some cortisone, which is a steroid. The fatty acids will help keep the skin “calm” and less prone to a burning sensation while the steroid in the formula will reduce inflammation. (Note: While many dogs resist having a bath, dogs with atopic dermatitis usually tolerate their baths quite well because they appreciate the relief from itching they confer.)

4. Feeding a therapeutic food (available from the veterinarian) that will cut down on the potential for allergic reactions. Granted, most of the allergens responsible for atopic dermatitis are airborne rather than foodborne, but a number of dogs are also allergic to various food proteins. Therapeutic foods keep those proteins to a minimum and also contain high levels of essential fatty acids believed to help keep the skin in good shape and various anti-itching agents. Examples include Hill’s Prescription Diet d/d and Royal Canin Skin Support.

The specific treatment a dog undergoes will depend on the severity of the disease, side effects a dog may experience from one or another medication, and a number of other factors. There are three types of specific treatment.

Steroids for Skin Problems in Dogs

These are very effective medications for controlling the clinical signs of atopic dermatitis when there’s a flare-up of symptoms. Low doses of prednisone, one type of steroid, are usually enough. However, steroids can’t be used for long periods because of serious side effects, including panting, excessive thirst and urination, untoward increases in appetite, and liver damage. For long-term management, cyclosporine or allergen specific immunotherapy are the best options.

This is an immunosuppressant drug, meaning it suppresses the activity of the immune system, which is what causes the inflammation and other unwanted reactions in the skin. It is highly effective, like steroids, controlling atopic dermatitis in more than 75 percent of cases. (It takes 10 to 14 days to see results.) It is also safe over the long term and easy to use. The dog gets one capsule a day with food. It does not even require testing to see what, exactly, a dog is allergic to. The downside is that there can be side effects. For instance, cyclosporine makes one in four dogs vomit, and it can also cause diarrhea and loss of appetite. In just about all instances, these effects are mild, but for those dogs with strong reactions, cyclosporine does not make the best option. In addition, some owners may find the drug prohibitively expensive. The first month, for a dog weighing between 40 and 50 pounds, the cost runs around $120. The second month, the dose can be cut in half, and then cut even more in the months to come. But that still comes to more than $600 a year. If the dog is large rather than medium-size, the price goes up.

ASIT is the technical term for allergy vaccines, or shots. A dog who undergoes ASIT definitely needs to be tested for specific allergies to make sure she gets the right inoculation, as the medicine consists of small quantities of the offending allergen in solution. That desensitizes the immune system to the substance over time. By “over time,” we mean that it can take nine months to a year to see results, which is why ASIT does not make a great option for an older dog whose future years are limited. ASIT is also not as good as cyclosporine for severe disease. It tends to be effective for mild to moderate cases of atopic dermatitis only, with a success rate of about 60 percent (as opposed to 75 percent for cyclosporine). ASIT requires frequent visits to the veterinarian to administer the shots — weekly at first, then once a month later on. Note: For dogs who have a severe reaction to cyclosporine, ASIT may very well be worth a try — once the dog undergoes testing to see what in the environment causes her to have allergic reactions.

Whitney was started on low-dose steroids combined with an antihistamine by her primary care veterinarian, and she was given the ASIT shots as well, but the problem only became worse. That’s when Ms. McCollough took her to see Lluis Ferrer, DVM, a veterinary dermatologist at Tufts. Dr. Ferrer discontinued the steroids but kept going with the shots and also prescribed a course of cyclosporine capsules. “Her coat is dramatically better now,” says Ms. McCollough. “She doesn’t have any lesions anymore. Dr. Ferrer suspects she’ll probably have flare-ups in the future and will have to go back to cyclosporine,” but for now, the shots alone are doing the trick.

“It’s a bit of trial and error,” says Dr. Ferrer. “You have to see what is right for each dog.”