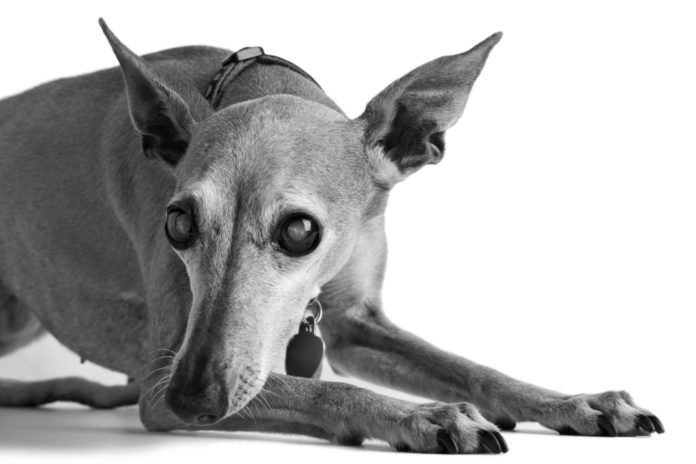 A cataract is a film overthe eye.

A cataract is one condition dog owners can diagnose themselves because of the telltale milky appearance it gives to the eyeball.

All cataracts can be treated.

All cataracts should be treated.

While most cataracts must be treated with surgery, some can be cleared up with eye drops.

One woman’s first clue was that her dog kept biting her every time she went to hand him a treat. He’d overshoot the mark and get her finger instead of the food. Another dog that belonged to a young couple fell into the pool, not seeing where the cement ended and the water began. He was scared to death (and so were his owners). Other dogs stop trying to chase squirrels and rabbits, tending to stay in just one spot; they start acting “old.” And some just keep bumping into things all the time. The loss of sight evidences itself in different ways.

While cataracts are not inordinately common in dogs, they do occur. Certain breeds appear particularly prone, cocker spaniels, poodles, miniature schnauzers, terriers, and golden retrievers among them. And those with diabetes definitely have a higher incidence than other dogs. “Put simplistically, sugars build up in the lens,” says board-certified veterinary ophthalmologist Nancy Bromberg, VMD, DACVO, “and cause it to suck surrounding fluid into the eye, disrupting the arrangement of proteins” involved in proper lens configuration. That keeps light from passing through the lens, whose purpose is to focus the light on the retina. The lack of light, in turn, stops the retina from processing images.

A dog’s getting clawed in the eye by a cat can also cause a break in the lens that leads to cataract formation; eye trauma is most assuredly a culprit. In most cases, however, cataract formation is hereditary. A dog simply is born with a predisposition to the problem.

But how can you tell whether it’s a cataract or something else that’s causing the vision problem? You can’t just by looking. You have to have the eyes checked out by a veterinarian. That cloudy, or milky, look on a dog’s eye is not the definitive sign. Yes, a dog with a cataract will have that look, but “the eyes of all dogs over the age of 7 or 8 start to appear a little cloudy,” says Dr. Bromberg, chair of public relations for the American College of Ophthalmology. “Most of the time, it’s a normal part of aging called lenticular sclerosis, a fancy term for hardening of the lens.” And although it may look bad, it doesn’t usually interfere with vision. Light still passes right though (although most dogs with lenticular sclerosis would probably benefit from reading glasses, if up-close visual detail were critical to their quality of life). Granted, more dogs are living longer, and the sclerosis can get so dense by the time a dog reaches age 15 or 16 that it basically is a cataract — light can’t pass through. “But in more than 90 percent of cases, lenticular sclerosis” doesn’t get that far, says Dr. Bromberg. With a cataract, on the other hand, the best-case scenario is that a dog may still be able to see light and a little bit of motion, but “they won’t really know what it is that’s making a shadow in front of them,” Dr. Bromberg notes.

So how does a veterinarian distinguish lenticular sclerosis from a true cataract? She can dilate a dog’s pupils and be able to tell from there whether the changes are age related or a true opacity that virtually won’t let any light pass through.

The only tried and true treatment for restoring vision when a dog (or person) has a cataract is surgery. “Every once in a while something gets put on the market claiming that if you put it into the eye, it will dissolve the cataract. But that’s all bogus,” Dr. Bromberg says. “Only an operation can take care of the problem.”

But are all dogs with a cataract eligible for cataract surgery? No. In some dogs the cataract is small and remains small, so plenty of light is still able to penetrate the lens. In other dogs, treating the cataract may not restore vision because there is too much degeneration of the retina behind it. Consider that a cataract by its strictest definition is a foreign body in the eye, which sets up the eye for inflammation. Sometimes the inflammation is so severe that it can cause retinal detachment. If that’s the case, the dog is not a good candidate for cataract surgery. “In some instances you need to perform a procedure called an electroretinogram that looks at the electrical responses of various types of cells in the retina to determine whether it is healthy enough for a cataract operation,” Dr. Bromberg says. “You may also need to do an ultrasound to determine if the retina is detached.”

Note that even if a dog makes a good candidate for cataract surgery because her retina is intact, that doesn’t necessarily mean she should have the surgery. “You have to decide, can your dog live with vision in only one eye, or in neither eye if cataracts have affected both of them,” advises Dr. Bromberg. “A lot of dogs have vision in only one eye and do well. If your dog is getting around and her quality of life is not affected, you might decide to forego the surgery. Some dogs can lead happy, healthy lives with no vision at all,” she adds. They just may need you, their owner, to be their seeing eye person. In that sense, Dr. Bromberg says, cataract surgery is always elective.

What’s not elective is controlling the inflammation that the presence of a cataract causes. That can lead to other problems, like glaucoma, which is a buildup of pressure in the eye.

“It’s very painful,” Dr. Bromberg says, “because it causes stretch receptors in the eye to shoot off. It has been equated with the pain of a migraine headache. Some dogs are pretty stoic,” she says, “and it’s hard to tell they’re in pain, but a lot of times a dog will stop eating or start vomiting or hide in corners.

“A lot of people don’t believe their dog is in pain,” she adds. “They may think their 9-year-old dog with glaucoma is slowing down simply because she’s older. But you don’t realize the dog has been in pain until you take away the source of the pain. When you treat the glaucoma, the dog starts playing again because she doesn’t have the super-intense, chronic headache anymore.”

If you do go forward with the surgery

“The vast majority of veterinary ophthalmologists treat cataracts with an operation called phacoemulsification,” Dr. Bromberg says. Basically, they create a small incision through the surface of the eye — the cornea — through which they reach the lens. Once there, they do not remove the milky film. That’s because there isn’t any. A cataract is not a film over the lens that can be peeled off. Rather, it’s opacification of the lens itself. Keep in mind that the lens is composed of layers of protein that are arranged just so in order for light to travel through it. A cataract is the disruption of that careful arrangement. Thus, the entire lens itself must be removed.

An ophthalmologist breaks up the lens with high-frequency ultrasonic waves emitted from a small probe. That literally turns the solid lens into a liquid, which then gets aspirated. The eye is also irrigated to further insure that all the particles are washed away.

Often, an artificial lens is put in place once the original is removed. In people who undergo cataract surgery, different strength artificial lenses are put into each eye, and the brain learns to use one for distance and one for reading. But in a dog, it’s sort of one-focal-distance-fits-all. Beyond a certain distance or very close up, things will appear somewhat fuzzy. But dogs do not have to do close work — or drive — as people do.

Not all dogs can get an artificial lens. The lens is held in place by a thin membrane called a capsule, and if the capsule has a tear or other disruption, it will not hold a new lens. That’s okay. Light will still pass through to the retina, and the dog will be able to see much better than before. It will just be relatively far-sighted, seeing reasonably well into the distance but not close up. And close or far, objects won’t appear as clear and crisp.

“A lot of my colleagues, if the capsule is disrupted, will actually sew a new lens into place,” Dr. Bromberg says. “I haven’t been brave enough to do that. There’s a lot that can go wrong. But even canine patients without an artificial lens are still so much better off than before.”

After the operation, the dog has to wear an Elizabethan collar for a while so she can’t reach the incision site. And bathing, swimming, and vigorous exercise have to be avoided for two to four weeks. In addition, she needs to be kept on medications for several months — eye drops and perhaps eye ointment in order to make sure the eye inflammation caused by the cataract retreats. “A lot of veterinarians stop following up when the medications are finished,” Dr. Bromberg says. “But I follow my patients for the rest of their lives. Complications can crop up a year or two down the line. I want to make sure I catch them.”

To be sure, complications are rare. At least 90 percent of cataract surgeries are successful. “But I’d be lying if I said there were never problems,” Dr. Bromberg says. “Sometimes there’s retinal detachment or hemorrhaging in the eye or secondary glaucoma. On rare occasions, you might have a bacterial complication, and sometimes the dog’s immune system will react to an artificial lens and it needs to be removed.” But most of the time, everything works out fine. A dog will go from acting like a lethargic, geriatric dog to acting like a puppy again, as one owner put it. She won’t be afraid to go down the stairs for fear of missing the treads. She’ll happily come to greet her owners when they walk in the door rather than stay put out of fear of bumping into the furniture and hurting herself.

“The surgery has really improved over time,” Dr. Bromberg states. “When I was training, phacoemulsification was in its infancy and not as precise as it is today. Most of the operations involved a larger incision into the cornea and a larger incision into the lens capsule as well. Over the last 30 years, we have learned to make the incisions only a fraction of what they were, and we’ve also learned the importance of irrigation after lens breakup to get rid of all remaining protein in the capsule. And of course, there’s the advent of the artificial lens for dogs and all the anti-inflammatory medications that we didn’t used to have. Better techniques and better medications have made for many fewer complications and a much higher rate of success.”

Got the basics on cataracts and their treatment? If so, go back to the beginning of this article and try answering the five questions again. If you get “false” for all of them, you’re seeing things clearly. 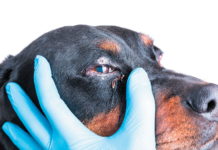 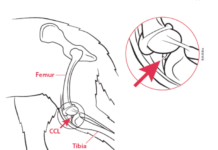