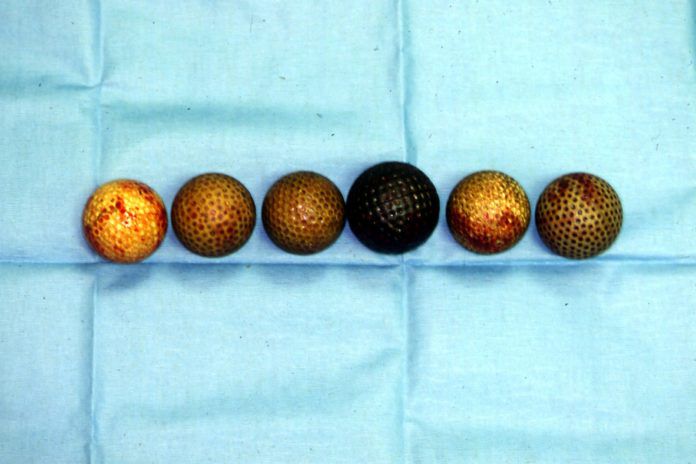 Pantyhose, golf balls, socks, rocks, underwear, baby bottle nipples, peach pits, plastic gadgets, wood glue, magnets. No, it’s not leftover refuse found in a pile at the town dump. It’s just some of the items swallowed by dogs and then retrieved from their GI tracts by Tufts veterinarians — on a regular basis!

“Dogs will literally swallow almost anything,” says Cummings School surgeon John Berg, DVM. “I had one dog whose owners had decorative pea gravel rocks around their pool. The dog swallowed, like, 1,500 of them. We had to perform an operation to takethem out.

“Corn cobs are another one,” Dr. Berg says. “Usually it’s not a whole cob. It’s after someone has cut it into segments.

“Those dogs most inclined to swallow things are young,” notes Dr. Berg. “Be most alert to this possibility early in a dog’s life. They like playing with things, are curious about the world, and investigate with their mouths. That’s when they get into trouble.

“We do occasionally see older dogs swallow foreign objects, too,” Dr. Berg says. “And some dogs are chronic repeaters. Don’t think a dog will learn from his experience and not do it again. We’ve seen dogs go back to surgery multiple times for foreign object removal.”

Following, a list of objects that are dangerous to swallow, very dangerous, and — contrary to popular opinion — safe.

Items Dangerous for Dogs to Swallow

Cloth items. Dogs like the odor of their owners, so it’s no surprise that some end up mouthing dirty laundry that has people’s scent on it — socks, underwear, pantyhose, and the like. Some of those dogs then get carried away and swallow such undergarments whole, gulping them down and causing obstructions either in their stomach or intestines. “Owners of new puppies in particular should be very careful about leaving that stuff around the house until they know their dog doesn’t have the inclination to try to swallow everything he comes into contact with,” Dr. Berg says. In other words, use a hamper with a secure lid, or keep undone laundry locked away.

Plastic wrap that meat came in. “Dogs will fish this out of the trash,” Dr. Berg cautions. “It’s one of the biggies” in terms of what dogs swallow, and like cloth material, it can cause GI obstructions. “Don’t allow access to the garbage can,” he advises.

Discrete objects. These include everything from the aforementioned corn cob segments to the nipples on baby bottles, the pits of stone fruits, and plastic items such as little squeaky toys. Larger items, like a wad of fabric, tend to remain in the stomach. Smaller ones, like little rocks, often pass out of the stomach and then get stuck in the small intestine.

String-like objects. Called linear foreign bodies by veterinarians, these include string that was used to wrap meat and was then discarded. “Strings tend to be more of a cat problem,” Dr. Berg points out. Cats like to play with string-like objects and will swallow cassette tape, ribbon, yarn, and the like whereas dogs tend to go for big pieces of fabric or toys. “But the rules for species are not hard and fast,” he says. Dogs do end up in string trouble, too. The reason it’s so bad is that one end of the piece of string often gets stuck under the tongue or inside the stomach, and the rest of the string passes into the intestine. Because one end of the string is anchored in place, the intestine can’t pass the string, so the “intestine crawls up the string instead” to try to digest it, Dr. Berg explains. “The string can then literally saw through the intestine and cause a perforation.”

String also comes attached to fabric. A wad of fabric will get stuck in the stomach, but a string of the fabric unraveling at the edge will make its way down into the intestine and can also cause slicing into the intestinal wall.

Wood glue. “Don’t freak if your dog licks up a little glue,” says Dr. Berg. “But if a dog swallows a large quantity of white-colored wood glue, it can swell in the stomach as it hardens, up to the size of a softball, or even a cantaloupe. At that point, surgery is required to remove it.”

Uncooked cous cous. This expands in the stomach “big time,” Dr. Berg says, causing painful gastric distention. Other types of uncooked food that are hydrated during the cooking process are not as dangerous, but keeping them out of paw’s reach is still a good idea.

Post-1982 pennies. In 1982, the federal government, to save money in minting costs, decided to stop making pennies purely out of copper and instead use a combination of copper and zinc. Now, pennies have a central core composed of zinc with a ring of copper on the outside and a copper coating all around. “But zinc corrodes in stomach acid,” Dr. Berg points out, “so a dog can get zinc toxicity. That can lead to gastric ulcer, not to mention kidney failure.”

Small magnets. “There’s a particularly notorious kind for dogs called Bucky Balls,” Dr. Berg says. They’re little round magnets that people will use as a desk ornament, stacking them into a pyramid shape or something like that. Another culrprit is children’s toys that have little magnets in them. If a dog swallows multiple magnets, which does happen, they can attract one another across intestinal wall sections, pinching pieces of the intestinal wall between them. That may then cause the wall to perforate. It’s rare, but we have seen it.

Teriyaki sticks. This one can be truly life-threatening. A dog can swallow a teriyaki stick whole (dogs really like them since they tend to have the odor of meat on them.) It will often pass through the esophagus just fine but end up crosswise in the stomach. “From there it pokes its way through the stomach wall and can then migrate through the body,” Dr. Berg says. “We’ve seen dogs with nasty infections in the chest cavity or abdomen. We’ve seen teriyaki sticks perforate the liver, too, and cause infections in the area of the kidneys.”

Sticks in general. A dog can easily crush a stick, which then breaks off into little splinters. And sometimes, one or more splinters can make it into the lining of the mouth and migrate from there into the neck or somewhere else in the head or face and cause an infection serious enough to require surgery. “The splinter dissolves,” Dr. Berg says, “but leaves behind an infection with an abscess — literally, a ‘pool’ of infection that becomes trapped in the tissues. We have to open up the abscess, drain it, and then put the dog on antibiotics. Most often the abscesses occur in the neck.”

Granted, Dr. Berg concedes, “many dogs can chew sticks their whole lives and never have a problem, but we see dogs here in New England pretty commonly who get infections from stick chewing. This is not just a puppy thing. Some older dogs never lose the desire to chew sticks.”

Dog owners are often told never to let their pet eat chicken bones. The fear is that a dog can easily crush a chicken bone with his teeth, causing it to splinter and then perforate the intestine. “But it’s largely an urban myth,” Dr. Berg says. “Chicken bone will almost inevitably dissolve in the stomach.

“Still, I would not make a point of letting a dog chew chicken bones,” he says. “I have had maybe two dogs in my career who swallowed pieces of chicken bone that then perforated the lining of their mouth or esophagus. So why take a chance? But don’t get hysterical if your dog gets some chicken bone before you have a chance to take it out of reach. Probably nothing’s going to happen.”

That said, there are bones that can cause dogs serious GI problems. See the box at the top right of this page.

At the vet’s office, x-rays will be taken to see if a foreign object can be located anywhere along the GI tract. Three hard-and-fast rules apply.

If the object has made it down the esophagus, into the stomach, from there to the small intestine and finally to the large intestine, “a dog will pass it with his stools,” Dr. Berg says. “We never remove a foreign body from the large intestine.”

If the object is a linear foreign body like a piece of string that has gotten into the small intestine, surgery is automatically required. “If you try to pull out the stringy object with an endoscope,” Dr. Berg points out, “you will cause the sawing action in the intestine that you’re trying to prevent.”

In any case in which the foreign body has caused perforation — which is most commonly an issue with esophageal or intestinal foreign bodies — surgery is automatically indicated.

Other scenarios may have more than one possible treatment solution, depending on the situation. For instance, if an object is in the esophagus or stomach, choice number 1 is removal with a flexible endoscope. “Ninety percent of objects in those locations can be removed that way,” Dr. Berg notes. But even that approach is not completely fail-safe. Sometimes the foreign body causes inflammation of the lining of the stomach or the esophagus, or even an ulcer, which is an area of the lining that has thinned or has a hole in it. These may require medical treatment after the foreign body has been removed endoscopically.

Sometimes a decision is made to perform surgery simply because it is determined with the scope that the object is wedged in too tightly to be pulled up through the esophagus. Or it’s too smooth and slippery to be grasped by the scope’s pincers. A hard, round ball is a good example. “A surgeon is always on standby at Tufts if a veterinarian can’t retrieve the object with a scope,” Dr. Berg says.

If an object ends up in the small intestine — not a stringy object but something with more bulk — the first choice is often simply to wait and see if it will pass into the large intestine on its own. Sometimes, if a dog is not feeling too poorly and x-rays show that a foreign object has not caused a complete obstruction, a veterinarian will give a dog IV fluids to improve intestinal motility and wait to see if the object moves along to be passed by the dog naturally. This may require repeat x-rays or ultrasounds to monitor the foreign body’s progress — or lack of it.

Unfortunately, that was not an option for the dog who swallowed 1,500 pieces of pea gravel that ended up in her stomach — no amount of fluids would have moved them down into the large intestine.

Fortuntaely, Dr. Berg was able to remove them via surgery. She is fine now, as the photo above indicates.