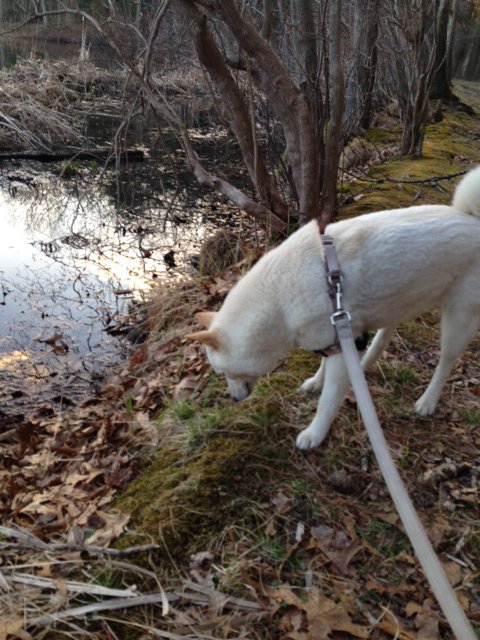 Guys, I’m not sure I ever told you that Rosie’s on Proin for life. When she first came to live with us at 6 months of age, she kept urinating right where she sat or lay, often ending up in a small puddle of her own making. She’d look back there unhappily, and for our part, we were afraid she’d get urine burn.

Since we were the fifth home she had been in during her short life, we figured she just hadn’t been “toilet” trained yet and so took her out many times a day (and night), hoping to teach her that elimination was supposed to happen beyond the back door. She would pee dutifully when walked but still kept wetting herself indoors. A visit to the veterinarian revealed that she had a weak bladder sphincter muscle, not a housetraining issue. The Proin keeps the sphincter taut.

It can also raise blood pressure, so every couple of bottles of Proin, we take her to the doctor to have her blood pressure checked. And wouldn’t you know, the last time we were there, the staff told us she was past due for her leptospirosis booster. It’s not recommended for every single dog, although in New England, where there’s lots of water — and lots of standing water (especially after this past winter’s snows, which have melted into vernal pools all over the place), it’s important. That’s because bacteria called leptospira can lurk in those waters and end up causing a dog grave, even life-threatening illness attributable to kidney or liver failure.

I don’t know why we forgot to get Rosie her lepto booster. Those notices come in the mail from the vet’s office and can get pushed aside along with the circulars and fliers. We should have paid closer attention.

What I do know is that because more than a year had passed since her last lepto booster, we had to start from scratch, which meant she needed a lepto vaccine and a second shot three weeks later — to the tune of another $105 because a second shot always involves a second exam by the vet, which doesn’t come free.

The moral of the story: don’t push aside those notices of vaccine updates from your veterinarian’s office. As the article starting on page 1 shows, those annual shots are not just “extra precautions.” They protect your dog’s life.