Pamela Woods of Modesto, California, is frustrated. It’s not that her four-year-old terrier mix, Butch Cassidy, isn’t wonderful. He is. “He doesn’t chew things and is generally well behaved,” she says. “But from the time he came to live with me 16 months ago, he has been licking my furniture, my pillows, and the rug. Just before I get up, he jumps onto the bed and licks my pillow. He frequently licks the couch and the rug under a chair when I’m in my home office. He stops when I tell him ‘no’ but is often back at it a few minutes later. He’s a great dog, but finding wet spots on the furniture or turning over on my pillow onto a wet patch isn’t fun.

“I’ve tried getting him toys, but he ignores them. All I know about his background is that he and his brother, Sundance, ran around town for two months before they were rescued. Someone else adopted the brother, so I have no idea about his behavior. Is there something I can do to stop it in Butch?”

Ms. Woods, we understand your concern. Please know that Butch is not licking your things to be “bad.” He can’t help it.

Why a dog might lick furniture and other inanimate objects
Licking in itself is a very normal behavior for dogs. “It’s something they do from very early on,” says Nicholas Dodman, BVMS, DACVB, Director of the Animal Behavior Clinic at Tufts. “As a young puppy, a dog licks his mom’s lips to cause her to regurgitate food she has chewed up for them. The licking is a stimulus for the regurgitation. (The mother is not vomiting. She’s simply getting the food into a form that makes it easier for the puppy to get it down his gullet.)

Dogs will also lick their own lips as a sign of submission, and of course, they lick their coats in grooming. Sometimes, they also lick people around the face — a vestige of licking their mother’s face or maybe simply a sign of affection.

But “licking inanimate objects is misdirected,” Dr. Dodman says, and in the case of not being able to stop, “seems excessive.

“Some people would say that it’s possible a natural behavior that is overly expressed could fall loosely into the bracket of obsessive compulsive disorder, a sort of minor league OCD,” Dr. Dodman says, adding, “that’s certainly one possible explanation.”

But sometimes, he adds, there’s a medical explanation for a dog’s over-licking. “I have seen these cases,” the doctor says. “One dog needed anti-convulsant medication. The licking would occur in bouts, lasting just a few minutes or for as long as 10 to 15 minutes. The dog would be lying perfectly still on the floor but then suddenly stand up and go into full-on licking behavior. It appeared he was suffering from partial complex seizures — not big seizures where he completely lost himself but something more akin to a little electrical disturbance in the brain that would cause the odd behavior.”

Unusual licking can also be a sign of illness somewhere in the body other than the brain. Consider that nausea is a common cause of excessive licking in dogs and can come from anything ranging from a new food or medicine to a disease that causes gastrointestinal discomfort, such as Irritable Bowel Syndrome, a gastric ulcer, gastritis (inflammation of the stomach), or liver disease. Dental pain or discomfort might cause a dog to lick, too, in an effort to dispel the unpleasant sensation in his mouth. In some cases, excessive licking could even be a sign of canine cognitive dysfunction, the dog version of Alzheimer’s, although the chances of that occurring with young Butch are far fetched.

Narrowing down the possibilities for Butch
If Butch were a geriatric dog with a calm demeanor, a veterinarian might start ordering tests to see if something were wrong with his GI tract or his brain. Says Valerie Tynes, DVM, DACVB, a veterinary behaviorist in Fort Worth, Texas, “it is unlikely for a middle-aged or older dog with a placid temperament and no history of anxiety-related disorders to suddenly develop a…compulsive behavior.” A new habit of excessively licking furniture in such a case should be followed up with the appropriate diagnostic tools.

But Butch is still quite young and perhaps anxious because of his unfortunate experiences having to fend for himself before coming to live with Ms. Woods. Also, the licking has been going on for some time, making a medical cause all the more unlikely. Clinical signs of a disease would have started showing by now if the licking were an indication of a medical condition.

That’s why Dr. Dodman says, “my hunch is that this is something along the lines of a compulsive disorder. Maybe it’s even attention-seeking behavior since he only seems to do it when his owner’s around. Or it could be a kind of displacement behavior, like biting your fingernails or wiggling your foot while waiting for something to happen. Perhaps what he’s waiting for is more interaction and he licks like crazy to cope with his frustration. I’d go in the direction of an emotional component rather than a physiologic one if Butch came to see me in my office.”

A compulsive disorder or other emotional issue seems especially possible in light of the fact that Ms. Woods says she is able to get her dog to stop the licking for a few minutes. If the licking is virtually impossible to disrupt, it’s more likely to be a medical problem, specifically, a neurologic problem.

Getting at a solution
Emotional problems such as the one Butch seems to be suffering from tend to arise from situations of anxiety, conflict, or frustration. Insufficient activity could lead to anxiety as well as frustration, as can alterations in routine or the addition or subtraction of a family member from the home, including another animal family member. Fear-provoking events can get a dog started on an unwanted behavior, too, by creating inner conflict. Ms. Woods might want to examine these possibilities with her veterinarian, who could refer her to a vet who is board-certified in animal behavior.

Whatever the source of the problem causing Butch’s licking, the solution comes through environmental management, behavior modification (including the owner’s), and pharmacologic intervention, that is, drugs.

Environmental management
One thing Ms. Woods can do is make sure Butch is getting adequate exercise. An energetic dog will go absolutely crazy with insufficient stimulation in the form of too much stillness, too much lying around. She can walk him more frequently, walk him longer, and engage him in classes such as agility training. Even teaching Butch new tricks at home is a form of physical stimulation that he would probably enjoy.

Ms. Woods should also alter Butch’s environment by removing any sources of fear. For instance, if there’s a big, scary dog at a house they tend to walk past, they should walk in a different direction. An anxious-seeming dog like Butch who has been through some tough times doesn’t need the added unpleasant jolt to his day.

Behavior modification
Behavior modification can work very well “in the moment.” For instance, when Butch comes into Ms. Woods’s bedroom in the morning, before he even gets on the bed, she can engage him in some kind of game or activity he finds fun and exciting. That will teach him that coming into her room doesn’t mean licking but something much more entertaining, perhaps a little game of fetch, or an enticing belly rub — anything to redirect his behavior so that a new habit replaces the one she finds objectionable.

One thing Ms. Woods should not do is get all excited when she sees that Butch has licked her belongings. If his behavior is attention-seeking rather than simply a manifestation of boredom or lack of activity (a board-certified veterinary behaviorist can help sort that out), he will engage in it even if the attention he gets is negative. She should try completely ignoring the undesirable licking, and that’s true whether or not she works to engage him in a new behavior at those times he wants to lick. It might seem counter-intuitive to ignore behavior you don’t like, but after several days (and the behavior may get worse before it gets better), if it is indeed a ploy for attention, it will extinguish itself.

Pharmacologic aids
If Butch’s behavior has become some kind of compulsion rather than simply an expression of frustration for lack of activity or attention, he may need a mood stabilizer like the tricyclic antidepressant clomipramine (Anafranil) or the SSRI fluoxetine (Prozac). Such drugs often take the edge off anxiety to the point that environmental management and behavior modification have a greater effect because the dog is calm enough to respond to the changes being implemented.

Butch on the whole seems like a very companionable dog. We feel confident that by employing some or all of the arsenal of solutions at hand, Ms. Woods will be able to coax him out of his insistent licking. 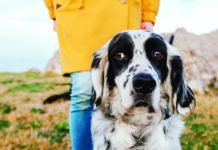