Home EVERYDAY DOGCARE Dogs Need to Be Brushed For Their Health, Not Just Their Looks
Print
Email
Facebook
Twitter 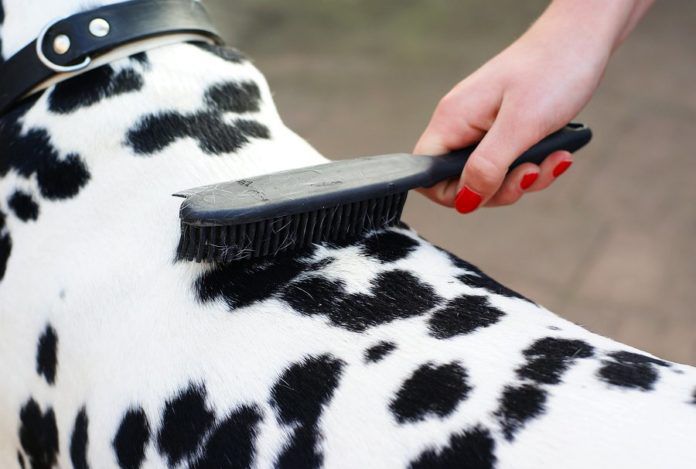 Take one look at an Afghan hound, and you know she has mega-grooming requirements. But did you know that beagles and a number of other shorter-haired breeds require a fair amount of brushing as well? That’s right. Any dog with a flat coat needs to be brushed regularly — at least once a week (think short-haired dog like Chihuahua or boxer) and more if she’s a big-time shedder like a golden retriever.

It’s not just to keep your home free of “tumbleweed.” Without regular brushing, tangles and mats of hair will form. That not only can be uncomfortable for your dog but can also make it easier for skin infections to take hold. And once they do, they can prove difficult to treat without shaving the affected area, requiring time and money for visits to the vet to chart progress. Hair that’s well taken care of, on the other hand, provides a good barrier against harmful bacteria and other pathogens. It distributes good oils from the dog’s skin throughout her coat, removes dirt, keeps her skin clean and irritant-free, and helps the hair form a uniform shield against unwanted elements.

No less important, for many dogs getting brushed just plain feels good and thereby increases your bond with them. Any time you spend engaged in an activity with your pet (particularly a pleasurable one) is time she isn’t spending by herself — bored while you watch television or take part in other activities that don’t involve her. (Of course, the great thing about brushing is that you can do it and watch your favorite TV show at the same time.)

While most dogs take to brushing very well, if you have a new puppy or a new older dog who’s skittish or a dog who feels that brushing is a way of invading her space, start with lots of short sessions of five to 10 minutes each, and try to keep them fun and soothing by speaking gently to your pet as you brush. You might even finish off with a food treat. How much pressure to apply: about as much as you would on your own hair. That is, don’t move the brush gingerly. Really brush.

The best kind of brush to use

A long-bristled brush meant for people works just fine on most dogs. The purpose isn’t for the brush to grab out a lot of hair (although it’s fine if loose hair comes off). It’s simply to keep the hairs individual — untangled and free from becoming all stuck together.

That said, if your dog has a long, thick undercoat (think Labrador retriever and German shepherd types), you’ll want to brush with what is known as a shedding blade — a wire loop with serrated edges that you pull along the dog’s hair with a handle. You can also use a curry comb — a rubber disc with short, teeth-shaped prongs.

The curly hair on dogs like poodles and Portuguese water dogs doesn’t really tangle; it separates naturally. It doesn’t shed a lot, either, so you don’t need to brush these dogs for the sake of your rugs and furniture. But you’re not completely off the hook. Such dogs need to go to a groomer every three months or so to have any mats that do form removed from their hair and also to have their hair trimmed. So do dogs whose hair is straight and gets brushed regularly but grows long, including Lhasa Apsos and Shih Tzus. They’ve got to be able to see easily and to move about without their hair becoming any kind of impediment; the hair shouldn’t become so long that it interferes with their quality of life.

Whoever cuts your dog’s hair, make sure they know what they’re doing. A lot of people end up at our emergency room with their dogs because they’ve nipped their pet’s skin while clipping. Trimming hair mats behind the ears is a particularly common way to unintentionally cause a dog to start bleeding.

In other words, for hair cutting, a professional groomer might be the way to go. A groomer can brush your dog’s hair, too — but of course not as often as you can. Then, too, brushing by a groomer can’t replace the dog’s increased sense of security from feeling your own hands, your own touch, along her back and sides.

An added bonus: if you brush your dog regularly, you’ll be more apt to pick up things that shouldn’t be there — an unwanted insect such as a tick, for instance, or a new lump or bump, or perhaps a skin lesion or hot spot that needs medical tending. 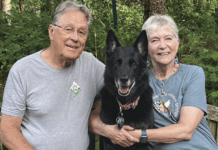