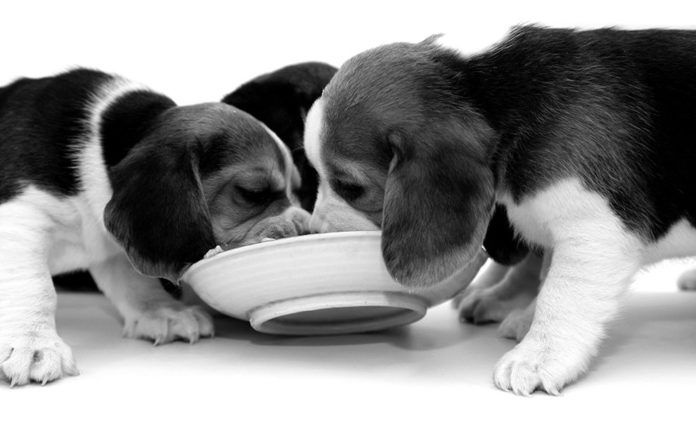 People are often told to eat slowly, both so that they don’t get indigestion and also because it’s simply what’s done in polite company. Dogs — you can tell them to eat slowly all you want. But for many, that advice will go about as far as reminding your pet that the fork goes on the left.

Why do a lot of dogs eat super-fast? To some degree, it may be about the fact that dogs simply don’t taste food as well as people do. They have only about 2,000 taste buds on their tongues, while people have more on the order of 9,000. Why savor your food if the flavor hit is not going to be that intense?

It may also be a matter of competition over food. If you have other pets in the house, including other dogs, your canine pal may want to insure that he gets his share before someone else helps himself. For other dogs, it may not be the actual presence of a second dog or, say, a cat but a throwback to his days as a puppy — a subconscious reminder of having to compete with his littermates for his mother’s milk. Some dogs exhibit their fear of not getting their share of resources by eating faster if someone walks near their bowl while they are eating.

For still other canine companions, an underlying medical problem could be the cause of fast eating. Pets with huge (or tiny) appetites, especially if the appetite changes are recent, could be undergoing changes in their hormones — the signals that tell their body when they’re hungry or full. Problems with hormone production or thyroid conditions could be at play. Check with your vet if you have seen big changes in your pet’s eating habits lately.

Another medical concern: if a dog is infested with parasites, the parasites could be hindering his absorption of nutrients, making him ravenously hungry.

Mostly it’s not an issue of disease or parasite infection. It’s strictly a behavioral issue. But that doesn’t mean it doesn’t come with health concerns.

Why Eating Too Fast is Bad

Food gulping can especially be a problem for some deep-chested, large-breed dogs, says Deborah Linder, DVM, a veterinary nutritionist at Tufts Cummings School. “Studies have shown that deep-chested dogs who eat too quickly can be at risk of bloat,” she says. The quicker the eating, the more air swallowed, and it’s the air that causes the bloating. That in itself is not harmful, although it can be unpleasant, both for the dog, who may end up burping a lot and feeling uncomfortable from stomach distention, and for you, if the dog keeps passing gas.

But it can lead to a very dangerous condition called gastric dilatation volvulus (GDV). Dilatation is the overstretching of the stomach — the bloating itself. But “volvulus” means the dilated stomach has twisted, becoming knotted off at either end — a condition so serious that the dog could die. If you have a deep-chested large breed dog — Great Danes are particularly prone — who suddenly develops a marked distension of the abdomen, seek veterinary attention immediately.

Another issue, while not a medical emergency, is that a dog who continually eats too fast “may not realize he is full and end up begging for more and then overeating,” says Tufts veterinary nutritionist Cailin Heinze, VMD. That, of course, can lead to weight gain that taxes the dog’s heart, joints, and other body systems. On a simpler level, eating very quickly can cause a dog to vomit, which, as for people, is an unpleasant experience.

“It’s also worth mentioning,” says Dr. Heinze, “that dogs who eat treats whole shouldn’t be fed them, as there is a risk of gastrointestinal obstruction, esophageal damage, and choking.” She is referring here to treats like dental chews and rawhide. Indeed, overly aggressive eaters could end up swallowing chunks of rawhide or other treats that are too large for their bodies, resulting not only in gastrointestinal discomfort but, sometimes, obstructions that require surgery. Even small pieces of rawhide can present problems, leading to choking or blockages in the esophagus that require a visit to the vet so she can use a special instrument (an endoscope) that goes far down the throat to be able to pull them out. For that reason, dog owners should take care to observe how their dog handles treats such as rawhide or dental chews. If he lazily works at it little by little, chances are it won’t cause any obstruction problems (although because rawhide is, well, raw, it could still potentially cause bacterial contamination). If he chomps frantically to bite off chunks and swallow them in one fell swoop, such foods, raw or not, are definitely not a good idea for him.

Even too-quick eating of regular food can make a dog end up choking because he hasn’t chewed his mouthful down to a size that can easily pass through the esophagus.

How to Slow Your Dog’s Eating

Fortunately, there are a number of methods for getting your dog to eat more leisurely, even if that’s nothis intention.

Feed him more than twice a day. There’s nothing engraved in stone about feeding half your dog’s food in the morning and half in the evening. It’s perfectly okay to fraction his daily ration into three, or even four feedings.

Split up each meal into several bowls placed in locations around the house.

Turn his metal food bowl upside down. Many of them, if they are designed not to tip over, will have a raised circle in the middle, sort of like an oversized middle of a bundt pan. Spread the food throughout the ring encircling the raised part. That will force your dog to keep lifting his head and moving to another part of the bowl, slowing him down each time.

Keep the food bowl raised off the ground, perhaps on a low table. That will make it more comfortable for your dog to eat, which could keep him from eating as quickly. (This doesn’t apply to large-breed dogs, as raising the bowl off the ground increases the amount of air swallowed and therefore is a risk factor for GDV.)

Use a bowl such as a Brake-Fast Bowl. It has plastic knobs, or “fingers,” in the center that the dog will have to eat around, slowing his chewing pace. It also slides, making the dog chase his food to some degree.

Consider feeding your dog from food toys like Kongs as well as food puzzles. Getting kibble out of those things is the opposite of being spoon-fed. It takes some doing — and time.