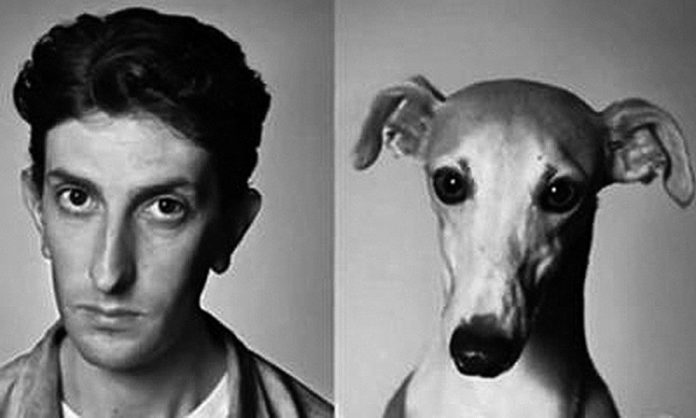 “It is uncanny how some dogs do seem to look like their owners,” says Nicholas Dodman, BVMS, director of the Tufts Animal Behavior Clinic. “We note it when people bring in their pets,” he says. “Not always, but sometimes it’s striking. Someone will come in with jowls, a flat face, who sort of looks like their bulldog. They walk out of the office, and I look at the assistant and say, ‘Did you-‘ and she’ll say, ‘Yeah, I thought so, too.’

“You wonder, did they choose the dog because of what they see in the mirror? Are people endeared to dogs who share the same rough physicality — a nose pushed in or a bulbous forehead? You’ll see it with couples, too. There can be something about them that somehow makes them look alike. Is it the same with dogs — something familiar perceived as more homey and thereby more desired? Or is this all an artifact — complete chance as opposed to active selection? Or is it even just our imaginations?”

Dr. Dodman isn’t the only one who has noticed the dog/owner resemblance thing. Sociologist Gini Graham Scott, PhD, even wrote a book about it, called, aptly enough, Do You Look Like Your Dog? She originally got the idea for it when she was at a dog show and observed dogs and their owners sitting next to each other.

“I think there is a fairly simple explanation” for the phenomenon, she writes in her book. “Just as people gravitate toward other people with whom they share an affinity, so it follows that people will choose to own pets with whom they share some kind of connection. Sometimes the choice is very conscious and deliberate,” other times not.

Okay, so that’s the thinking, but is there any proof? It turns out there is a bit of evidence to support the notion that some people choose dogs, consciously or subconsciously, who bear something of a resemblance to them. In one study published in the British journal Anthrozos, 40 purebred dogs, including such diverse breeds as toy poodles and border collies, were compared to their 40 owners. Specifically, 70 “judges” were shown pictures of the dogs and their owners and picked the correct combinations a significantly higher proportion of the time than could have been expected by coincidence. In a second experiment conducted by the same researchers, 186 judges were asked to look at two sets of photos. Set A contained 20 correct pairs of dogs and owners, and set B contained 20 incorrect pairs — the dogs in that set did not belong to the people in the pictures. Again, the judges could tell what was what. Almost two thirds of them correctly identified the dog-owner pairs.

In yet another experiment, when 187 judges were asked which set included more similar-looking dog-owner pairs, 66 percent chose correctly. The expected coincidental level of picking correctly would have been 50 percent. Said lead researcher Nakajima Sadahiko, PhD, an expert in animal psychology at Japan’s Kwansei Gakuin University, “we have not solved the question of why owners’ faces look like dogs, but people can have a friendly feeling toward familiar things.”

It’s also possible, says Dr. Sadahiko, that dogs don’t start out looking like their owners but “gradually become similar…while being kept as pets.” Research has suggested that human couples develop facial similarities over time, perhaps because they go through the same experiences and therefore have similar expressions etched on their faces. Maybe the same is also true of dogs and their owners.

Dr. Sadahiko isn’t the only scientist who has investigated the theory that when you see, say, a curly-haired black poodle attached to a person with dark, curly hair, it’s not a coincidence. Nicholas Christenfeld, a professor of psychology at the University of California, took photos of dogs in a San Diego park and also took separate photos of their owners. He then asked strangers to match the photos of the dogs to the photos of their owners. The results were similar to those of Dr. Sadahiko’s: people accurately lined up dogs and their owners two times out of three — as long as the dog was a purebred. The results were not as impressive with mutts.

There’s a reasonable explanation for that. When you choose a purebred dog, you know exactly what he’ll look like as an adult. With a mixed breed, how the dog will look when he matures is a bit of a crapshoot. Then, too, people often take home a mixed breed dog by chance — for instance, when they’re checking out potential pets at the shelter. That ratchets down the possibility that they’re going for a dog with a particular look.

Psychology professor Stanley Coren, author of popular books such as The Intelligence of Dogs, isn’t surprised by the effect of similarity in features that might lead people to adopt a dog who somehow looks like themselves. “Simply put, we like things that are familiar,” he writes in Psychology Today. “It explains why people vote for actors, and the sons, daughters or wives of well known people without any knowledge of their actual competence for the elected position — it is simply because the name is…familiar.”

And what could be more familiar than our own faces, which we see in the mirror every single morning and thousands of times throughout the year as we pass by store windows and other reflecting materials that keep showing us what we look like?

Dr. Coren tested the theory of people choosing lookalike dogs himself. He showed more than 100 women portraits of four different dog breeds: English springer spaniel, beagle, Siberian husky, and basenji. Each woman was asked to rate the degree to which she liked the look of the dog, how friendly she thought it was, how loyal it might be, and how intelligent. The women were also asked to look over a series of hair style sketches and say which most closely matched their own hair style.

The hair styles were actually separated into two groups: the first contained longer styles that covered the ears, while the second contained either shorter hair or longer hair that was pulled back so that the woman’s ears showed.

The results: generally speaking, women with longer hair covering their ears tended to say better things about the springer spaniel and the beagle, calling them more friendly, loyal, and intelligent than the husky and basenji. Women with shorter hair, on the other hand, preferred the husky and basenji over the long-eared dogs. Long hair, like long ears, frames the face. Shorter hair, like shorter ears, gives the face unframed lines.

The findings were not overwhelming, Dr. Coren points out. There were long-haired women who preferred the short-eared dogs and vice versa. But the size of the effect was large enough to be “statistically reliable,” he says, adding to the evidence that when a dog looks like his owner, there’s a reasonable chance it didn’t just happen. n